A message from DI Executive Director Wendy Fields:
"Every day, people of color & marginalized communities watch and suffer at the hands of the wealthy and privileged who act above the law. On December 19, 2019, when President Trump was impeached, the US House of Representatives checked his abuses of power. We look now to the Senate, which includes a former judge and 12 former prosecutors, who can also use this moment to stop the President from acting above the law.

Moving beyond impeachment to 2020, we look forward to major opportunities in 2020 to advance democracy reform in states like Virginia."

Happy Holidays from the DI Team.This will be the last weekly update before the New Year. The update will resume on January 8, 2020. Please contact Jack Flynn at jflynn@democracyinitiative.org, to submit items to be included.

IMPEACHMENT IS AN ELECTION SECURITY ISSUE

Democracy Initiative Executive Director Wendy Fields, on the subject of the two Articles of Impeachment approved by the House Judiciary Committee, gave the following statement:

"Many hardworking Americans are asking themselves why they should care that Congress issued two articles of impeachment. POTUS has faced no consequences for the way he conducts his Presidential duties and people are skeptical that the Senate will do anything to hold him accountable. At the DI, we think it is pretty simple. Yes, we should care. The Articles of Impeachment being considered by the House are meant to ensure that only American voters decide who wins American elections.

President Trump openly asked a foreign government to interfere in our 2020 elections. The right of all Americans to have a voice in government decisions is the essence of our democracy and it is what we at the Democracy Initiative fight for every day.

Foreign governments can have no say or role in our elections. We witnessed what happened in 2016 and both sides of the aisle agree that our elections must be secure and free of foreign intervention. Foreign interference in U.S. elections diminishes the voice of each and every American. I am not okay with the President of the United States trying to give my power away like that, especially while he is also working making it harder for those most oppressed to cast their vote.

At a time when the basic tenets of our democracy are under daily assault, leaving government in the clutches of powerful corporations and wealthy elites is not an option. We must be vigilant like never before. Join us in keeping an eye on the proceedings, join us in keeping the point simple: this is about securing our votes and election process. That is what every elected official should be voting on, particularly during the Senate trial next year."

On Tuesday, December 17, at 5:30pm local time, over 200,000 Americans at more than 600 events across the country took to the streets to demonstrate their support for impeachment at rallies organized and promoted by DI partners and allies Bend the Arc: Jewish Action, Center for Popular Democracy, Common Cause, Daily Kos, Demos, Free Speech for People, Friends of the Earth, Greenpeace USA, MoveOn.org, People's Action Institute, PFAW, Public Citizen, SEIU, Sierra Club, and others. 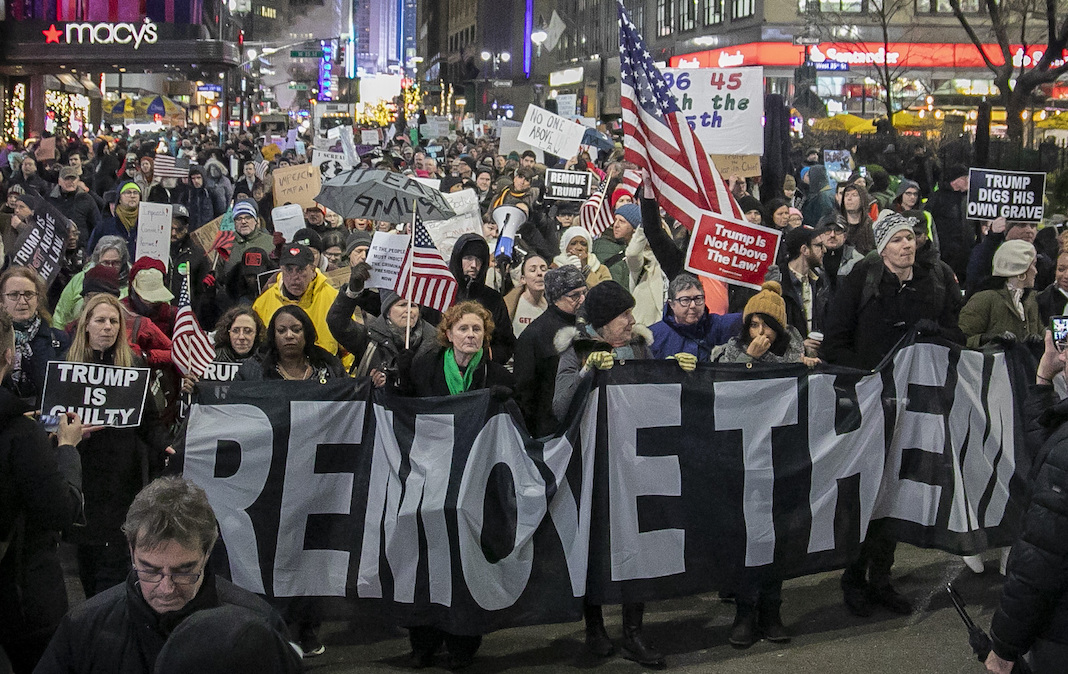 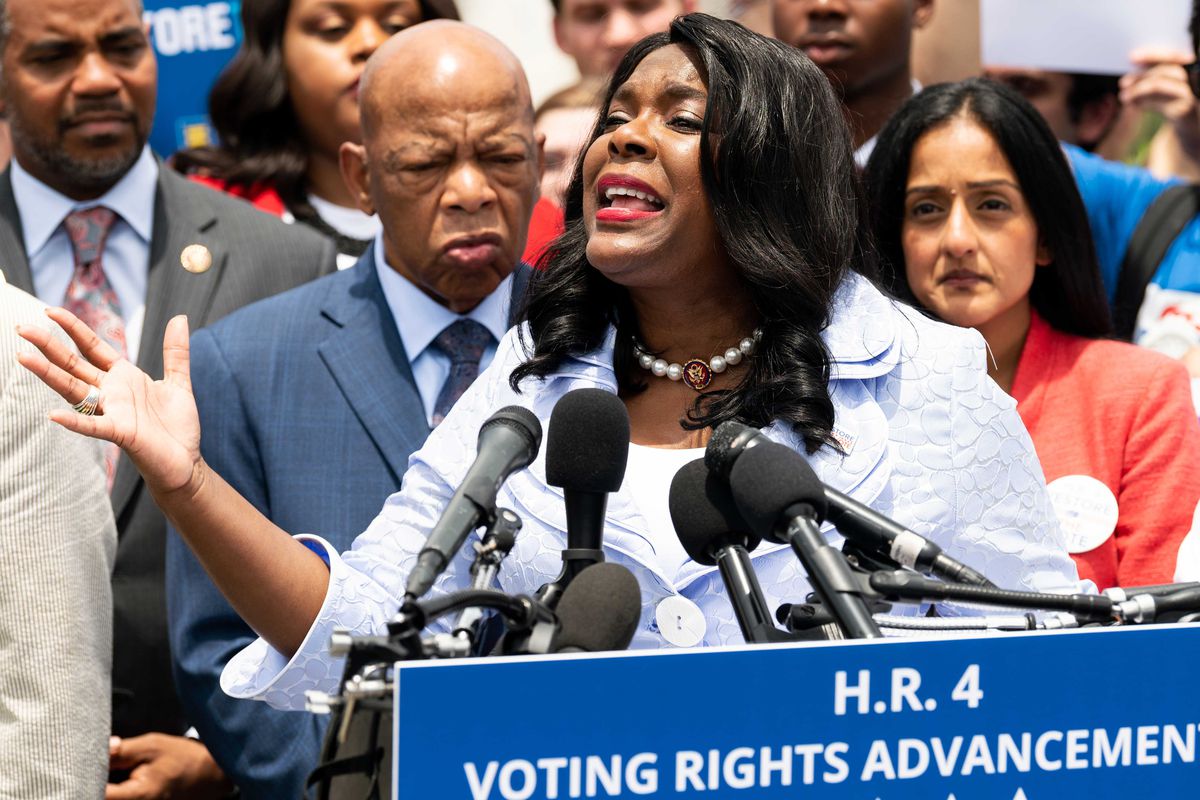 The House made historic strides on Friday, December 6 to protect the rights of Black and Brown voters in our democracy by passing the Voting Rights Advancement Act (H.R. 4), a bill that restores key provisions of the 1965 Voting Rights Act gutted in a 2013 Supreme Court decision. In the Shelby v. Holder ruling, the Supreme Court declared unconstitutional provisions requiring states with a history of racist voter disenfranchisement to pass federal review before changing voting laws. After “preclearance,” one of the most important tools for protecting voters, was no longer required, voter suppression laws such as voter ID proliferated across the country.

Passing the VRAA is a crucial victory in the fight to fully protect all Americans’ ability to participate in our democracy.

Democracy Initiative Executive Director Wendy Fields made the following statement after the House’s passage of the Voting Rights Advancement Act:

"Today’s House passage of H.R. 4, the Voting Rights Advancement Act (VRAA), is an important victory on the road to defeating the rise of voter suppression and ensuring that all Americans, especially Black and Brown and other marginalized people, can take their rightful place at the governing table and have a meaningful voice in decision-making that affects their lives.

Despite deliberate, coordinated voter suppression, designed to disenfranchise millions of Americans, and bankrolled by corporate interests and the wealthy few, the American people are demanding democracy and beginning to turn the tide. In 2018, voters in Michigan, Missouri, Maryland and Florida overwhelmingly passed reform packages that make voting secure and accessible; make districts fairer and less beholden to partisan interference; and curb the influence of the wealthy and privileged elite in our political process. That momentum continues in 2019, with House passage of HR 4 today and HR 1 in March along with numerous new state reforms including Automatic Voter Registration (AVR) in Maine, expansion of AVR in Colorado; Vote By Mail in Hawaii; voting rights restoration victories in Nevada and New Hampshire.

Together with our 72 partner organizations representing 45 million Americans, we commend the House for taking us another step closer to delivering on the promise of American democracy. And we call on the Senate to stop being a legislative graveyard and get on with doing the people’s business."

We want to acknowledge the hard work of DI partners and allies, whose members’ demands for a fair and just democracy in which all can participate put pressure on our elected officials. The Declaration for American Democracy coalition, in which the DI is a member, collected 26 statements in support of the passage of H.R. 4 in the House from coalition partners and allies. See all statements here.

Join us for the first mobilizing meeting of 2020 on Wednesday, January 15 at 3PM EST to discuss opportunities to support a democracy agenda in Virginia. Significant opportunities, from money-in-politics and redistricting reform to a host of voting reforms including Vote at Home, Election Day Registration, and improved early voting (for an article describing 2020 democracy reform opportunities in Virginia, click here).

We will hear from Tram Nguyen, Co-Executive Director of the New Virginia Majority on some exciting opportunities to mobilize your grassroots members on voting rights and democracy policy agenda during the 60-day session.

For more information and to RSVP, email our National Field Manager Getachew Kassa at gkassa@democracyinitiative.org.

TAKE ACTION: DAILY KOS SWAP PETITION CAMPAIGN FOR VOTE BY MAILLast week, we joined with DI partner Daily Kos to launch a multi-partner petition calling on state governments to enact Vote-by-Mail to encourage great civic participation in our democracy. The swap petition campaign will focus on expanding vote-by-mail with prepaid postage nationwide by urging governors to act ahead of the 2020 elections. Currently, vote-by-mail states enjoy a 15 percent higher median turnout than polling-place-centric states during the 2018 primary.

During our 2019 DI Annual Meeting, partners coalesced around the need for Vote By Mail as a crucial reform alongside Election Day Registration and Early Voting to improve accessibility, increase civic participation, and secure our elections. We applaud Daily Kos for taking action and prioritizing this demand going forward.

You can find more info on this swap petition and how Daily Kos swap tool works by contacting Daily Kos Digital Campaigner Erin Tulley at erin.tulley@dailykos.com. 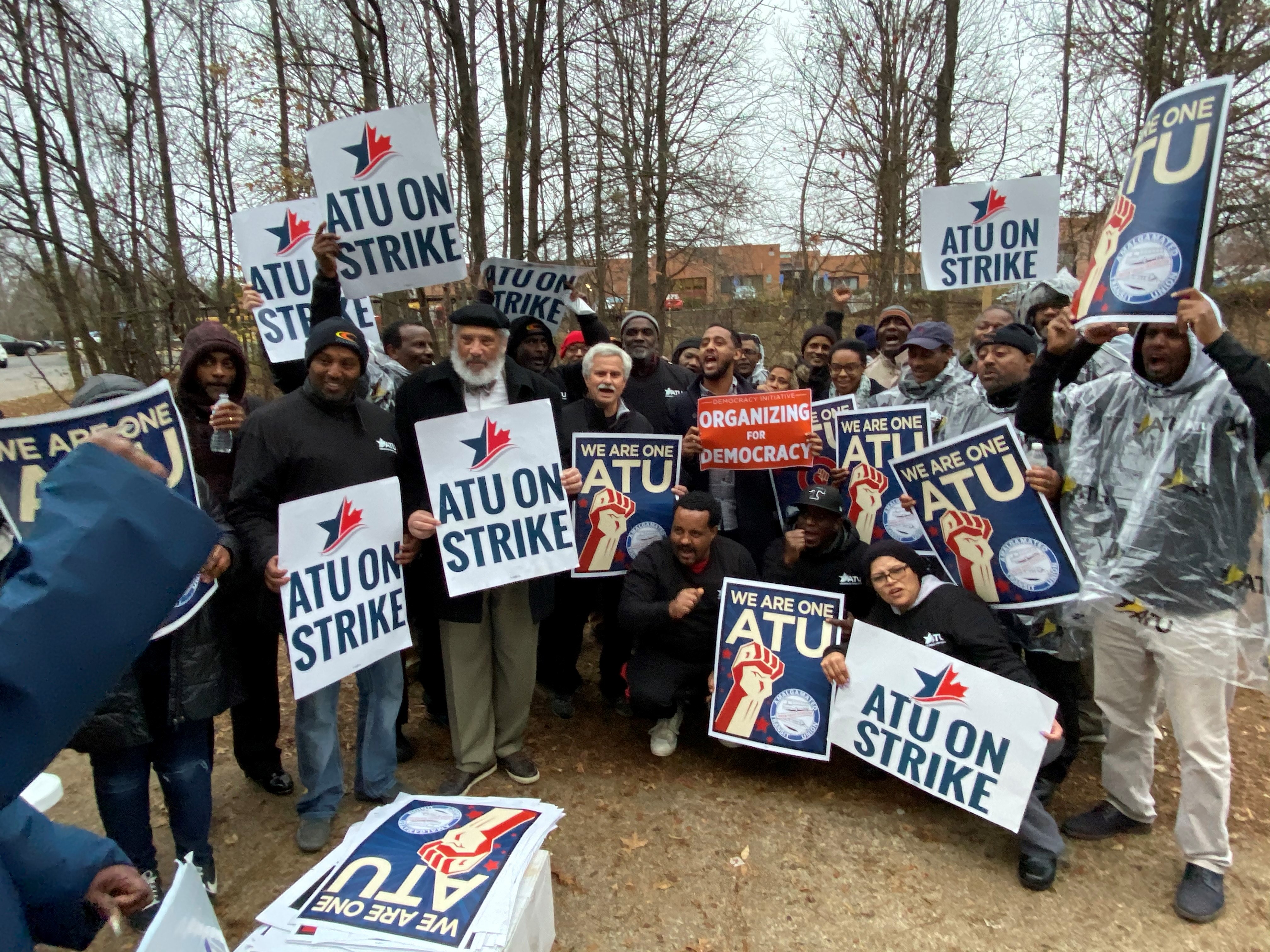 Negotiations broke down before ATU and the contractor Transdev reached agreement over a new contract, and more than 600 members of ATU 1764 authorized the strike, which comes after Transdev has engaged in unfair labor practices and bad faith bargaining tactics. We stand in solidarity with our partner ATU and with the workers walking the line for a fair and just contract. 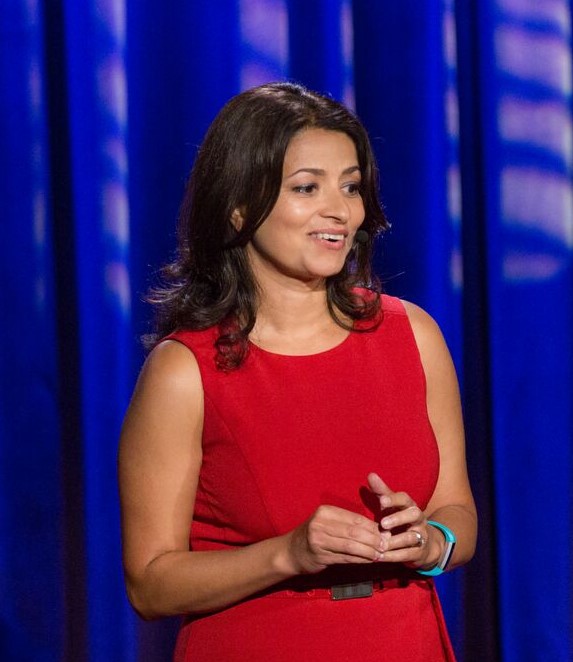 Sayu Bhojwani, President of DI partner New American Leaders, published a new op-ed on Tuesday, December 10 making the case for the Senate to urgently take up voting rights reform. Though the House passed both the landmark For the People Act (H.R. 1) and, more recently, the Voting Rights Advancement Act (H.R. 4) to expand and protect the power of American voters, the Senate under Mitch McConnell has refused to take action.

“This kind of record-breaking turnout could have been achieved years ago if everyone had easy, equitable access to our democracy. But because of hundreds of years of voter suppression and disenfranchisement, Congress is still overwhelmingly pale, stale and male. The result? Immigrants, refugees and other marginalized communities are underrepresented and constantly under attack by the very people who are supposed to represent them. To correct course, we need public officials to show some backbone by tackling our country’s long history of voter suppression and disenfranchisement.” 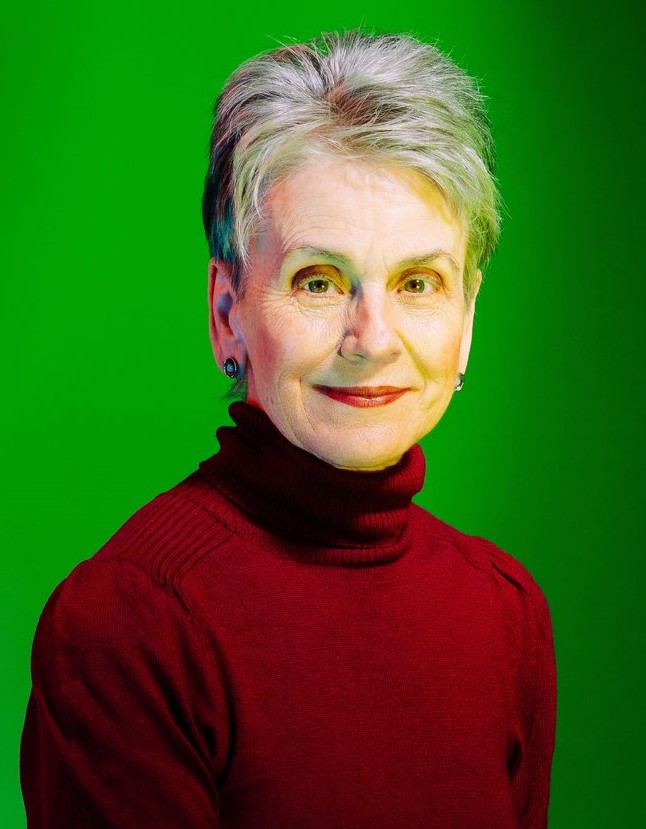 "Democracy stands for a set of three conditions that are necessary to bring forth the best in our nature and keep the worst in check. It means the continuous and wide dispersion of economic and political power; it means transparency; and it means cultivating a culture of mutual accountability. The reason that this system is creating such incredible misery is that our essential needs for power, meaning and connection are not fulfilled by it. The challenge is trying to embody those needs in our lives and work for them in terms of changing the system’s rules and norms. It relates to the idea of finding your inner citizen and participating in changing system laws, not just policy laws." 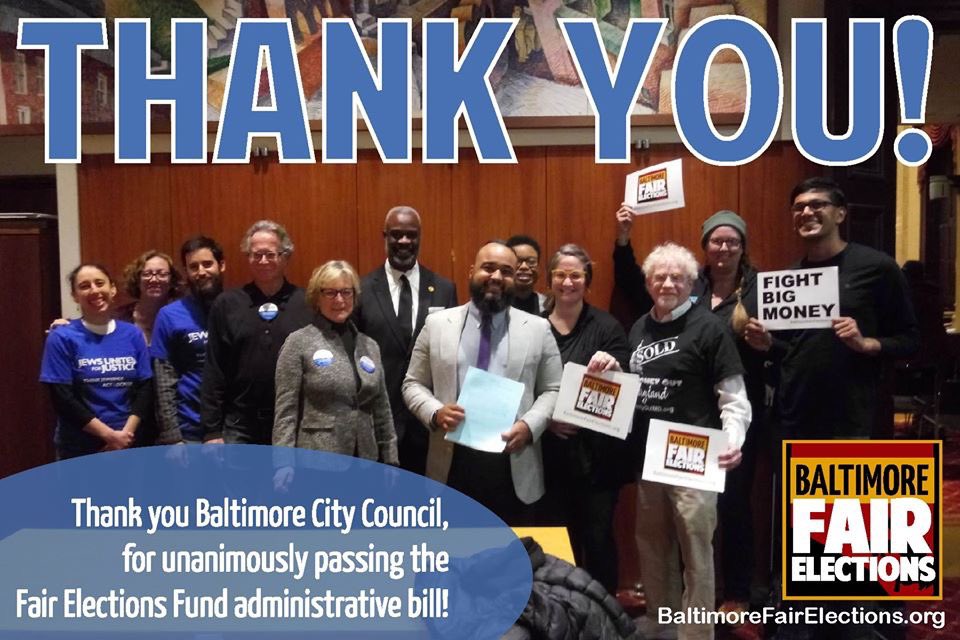 On Monday, December 2, the Baltimore City Council passed a bill to establish the Baltimore Fair Election Fund, a public campaign financing system for local candidates, that was overwhelmingly supported by Baltimore voters in the 2018 midterm elections. Councilmember Kristerfer Burnett, who introduced the legislation, said

“We want to make sure that people who run for office have a good shot, and that shot is based on their ability, their message, their vision for Baltimore and not necessarily access to capital.”

We acknowledge and recognize the hard work of DI partners and allies Baltimore Teachers Union, Common Cause Maryland, Demos, Get Money Out of MD, Jews United for Justice, Leaders of a Beautiful Struggle, League of Women Voters of Maryland, Maryland PIRG, NAACP, and others over two years to ensure the will of Baltimore voters is made reality. The legislation now heads to the mayor’s desk to be signed into law.

KENTUCKY GOVERNOR RE-ENFRANCHISES 140,000 RETURNING CITIZENSGovernor Andy Bashear of Kentucky signed an executive order on Thursday, December 12—two days after taking office—immediately restoring the ability to vote to as many as 140,000 formerly incarcerated Kentuckians who have completed “non-violent” sentences; as recently as 2016, 9% of the population, and more than one in four African Americans, were unable to vote. As one of two remaining states that permanently disenfranchises residents unless pardoned by the governor, Kentucky has taken an important step toward ensuring the voices of all residents are heard. We acknowledge the work of DI partners and allies ACLU, Kentucky State Conference of the NAACP, and others for their leadership in this fight.