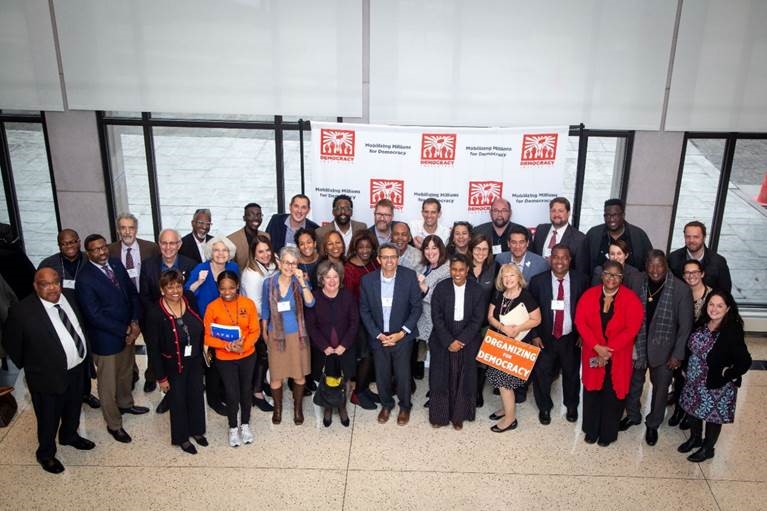 Over eighty national and state leaders and activists from 47 organizations came together last week for our 2019 Annual Meeting: Setting the Table for Governing in 2021. We especially appreciate the 38 principals and senior leaders (including the DI Board) who joined us at the luncheon discussion and contributed to shaping the 2020 goals and campaign plan.

The packed room at the AFL-CIO offered many powerful reminders about the importance of organizing our constituencies and staying unified—holding the line in response to the politics of greed and hate coming from the opposition.

DI partners came prepared to plot the course to seizing this historic moment to win a 21st century democracy. This means ramping up our efforts to win reform through legislation and the ballot, focusing on strategic organizing, and committing to mobilizing and disruption, up to and including taking direct action to shift power in order to win transformative change. Many organizations committed to lead on increasing civic participation by creating a center of gravity around reforms like Vote at Home, Same Day Registration, and organizing grassroots demand that the U.S. Senate stops being a cemetery where bills that affect the lives of our constituencies go to die. Long-time democracy leader Senator Jeff Merkley (D-OR) was compelling in sharing his perspective and commitment to Senate rules reform.

In addition, we heard—loud and clear—partners call for ensuring we have a coordinated, disciplined narrative around those corporate and wealthy interests that corrode our political system. We have heard your desire to deepen our efforts to protect the fundamental democratic right to protest and dissent and provide a platform to support Census work through the designated partner hub organizations and DI partners including Arab American Institute, LGBTQ Task Force, and NAACP. The DI team looks forward to continuing the fight for a representative, inclusive, and robust democracy with our coalition partners in the coming year.

A warm thank you from all of us here at the DI to participants in our 8th Annual Meeting:

We could not have had such a successful Annual Meeting without all of you!

60 OF THE COUNTRY'S RICHEST COMPANIES TAXED $0 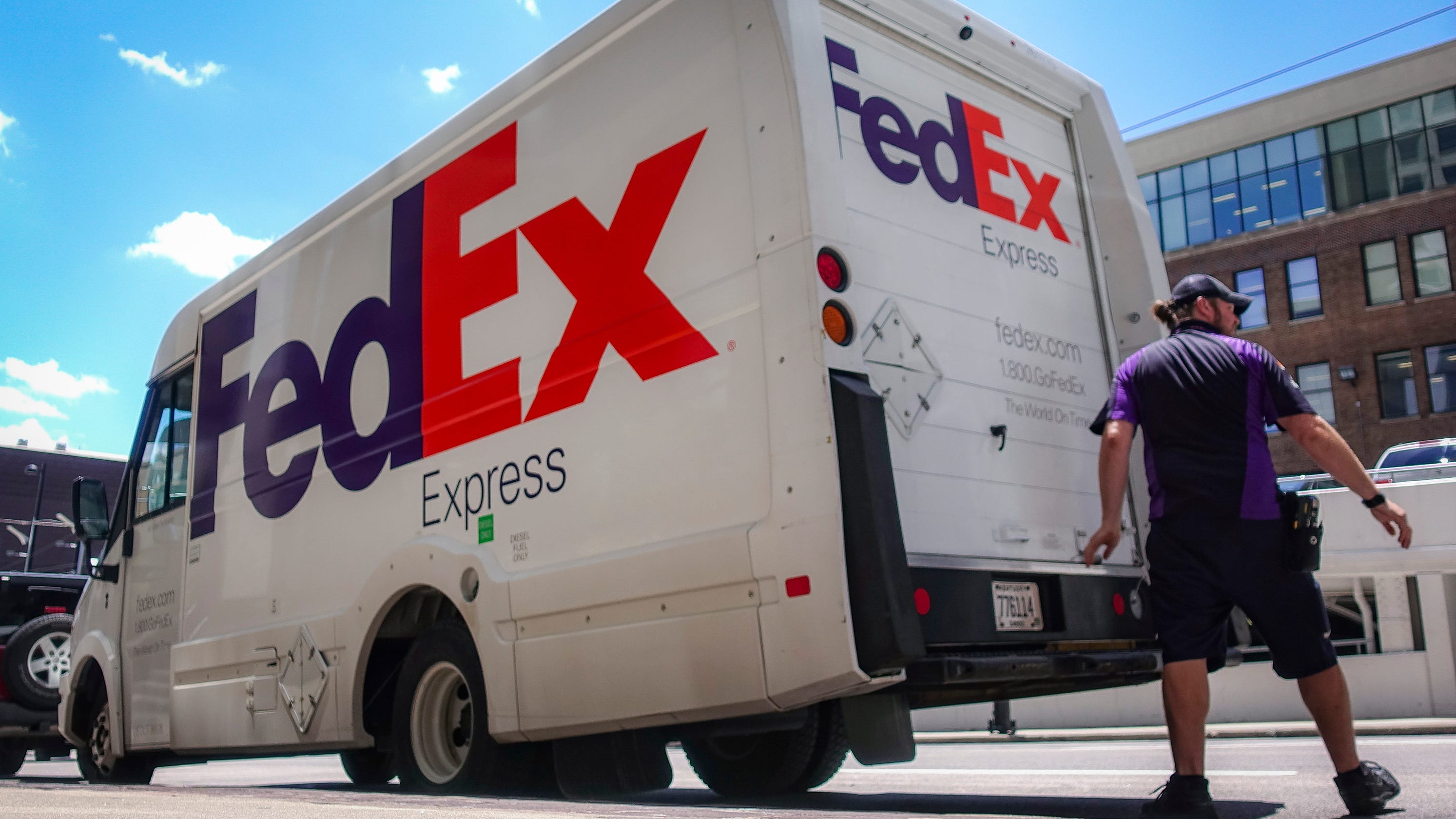 On Sunday, November 17, a New York Times article revealed that the company FedEx paid $0 in federal income taxes in 2018. That year, FedEx leadership claimed that it would be investing the $3.2 billion it saved from the tax cuts into pensions, wage increases, and bonuses, with the pensions alone receiving $1.5 billion. On Monday, FedEx’s head of HR announced employees hired after January 1, 2020 will not be eligible for pensions.

FedEx, along with 60 other Fortune 500 companies who earned a combined profit of $79 billion last year, used tax loopholes and the new 2017 tax cuts to avoid paying any federal income taxes, according to an analysis by the Institute on Taxation and Economic Policy (ITEP). If they had paid taxes the new Trump rate of 21%, the taxes collected from these companies would total $16.4 billion. Instead, the government owes them a collective $4.3 billion refund.

It is important to recall that these tax cuts, little more than a corporate wish list, were passed at the behest of wealthy donors and right-wing institutions funded by secret money (who in turn receive generous input and funding from these very same corporations). FedEx alone spent $2.5 million on campaign contributions and roughly $25 million on lobbying in the 2016 cycle. Having now seen the reports from the 2018 fiscal year, we can see clearly that corporations have—more so than ever before—succeeded in writing the very rules from which they benefit immensely. They have Congress working for them, not us.

The benefits of the 2017 tax cuts, deregulation, and other actions on behalf of corporations by this administration will only continue to compound if left unchecked. That’s why the consensus of leaders from across sectors and issues that emerged at our 2019 Annual Meeting around the need for bold, direct action has never been more timely. The way to rewrite the rules in our favor begins with our commitment to disrupting the flow of corporate political money into our elections and government, so that corporations like FedEx cannot pay to write the rules and instead pay their fair share of taxes.

NEBRASKA—STATE DMV COMPLIES WITH UNCONSTITUTIONAL REQUEST FOR CITIZENSHIP INFORMATIONThe state’s Department of Motor Vehicles has volunteered to share driver’s license records with the US Census Bureau in an effort to comply with the Trump administration’s efforts to secure citizenship information for the 2020 census. It is the first and only state so far to do so.

The citizenship question was originally proposed as a method of stripping Latinx communities, non citizens, and other immigrant communities of fair political representation and federal funding according to documents obtained by DI partner Common Cause. After federal courts declared Commerce Secretary Wilbur Ross’ directive to add a mandatory citizenship question to the census forms unconstitutional, the Trump administration issued an executive order to try to accomplish the same. Some states, such as Maine, have stated they will not share driver’s license records with the bureau.

GEORGIA—300,000 VOTERS AT RISK FOR PURGE BEFORE MARCH PRIMARIES, AGAINDI partner League of Women Voters and other allies have urged Georgia’s Secretary of State to halt plans to purge at least 300,000 voters from the rolls before the March primaries, citing badly flawed methodology.

In the letter drafted by Campaign Legal Center, the groups argued: “Georgia’s policy should be to encourage infrequent voters to participate in our democracy, not further alienate infrequent voters by purging them from the rolls and putting up another obstacle to further participation.”

Nearly 100,000 names identified for removal solely because they have not voted in the last two federal elections are at the greatest risk; in previous election, an overwhelming majority of the 107,000 voters purged for failing to use their vote immediately reregistered in the same counties where they were listed before the purge, demonstrating that the state’s policy for removal is still in desperate need of reform.