We want to recognize DI partners Alliance for Justice, Arab American Institute, Asian Americans Advancing Justice, CASA, Common Cause, Daily Kos, League of Conservation Voters, NAACP, National LGBTQ Task Force, and PFAW for turning out in support of fair representation & a fair and accurate census in 2020. Let us know if we missed you!

The Supreme Court has completely abdicated its responsibility to defend the foundation of our democratic system: government by will of the people. On June 27, SCOTUS narrowly ruled by a 5-4 margin that partisan gerrymandering claims were "nonjusticiable," meaning that it's not within the courts' powers to pass judgment on these kinds of cases. Despite the fact that cases in lower courts in several states across the country have developed clear standards that the judiciary could use to determine if gerrymanders infringed on voting rights, the majority ordered the case dismissed.

By failing to endorse a standard for striking down this deeply undemocratic practice, SCOTUS has effectively given a green light for corrupt politicians to continue to seize power for themselves and choose their voters, rather than voters choosing their politicians. 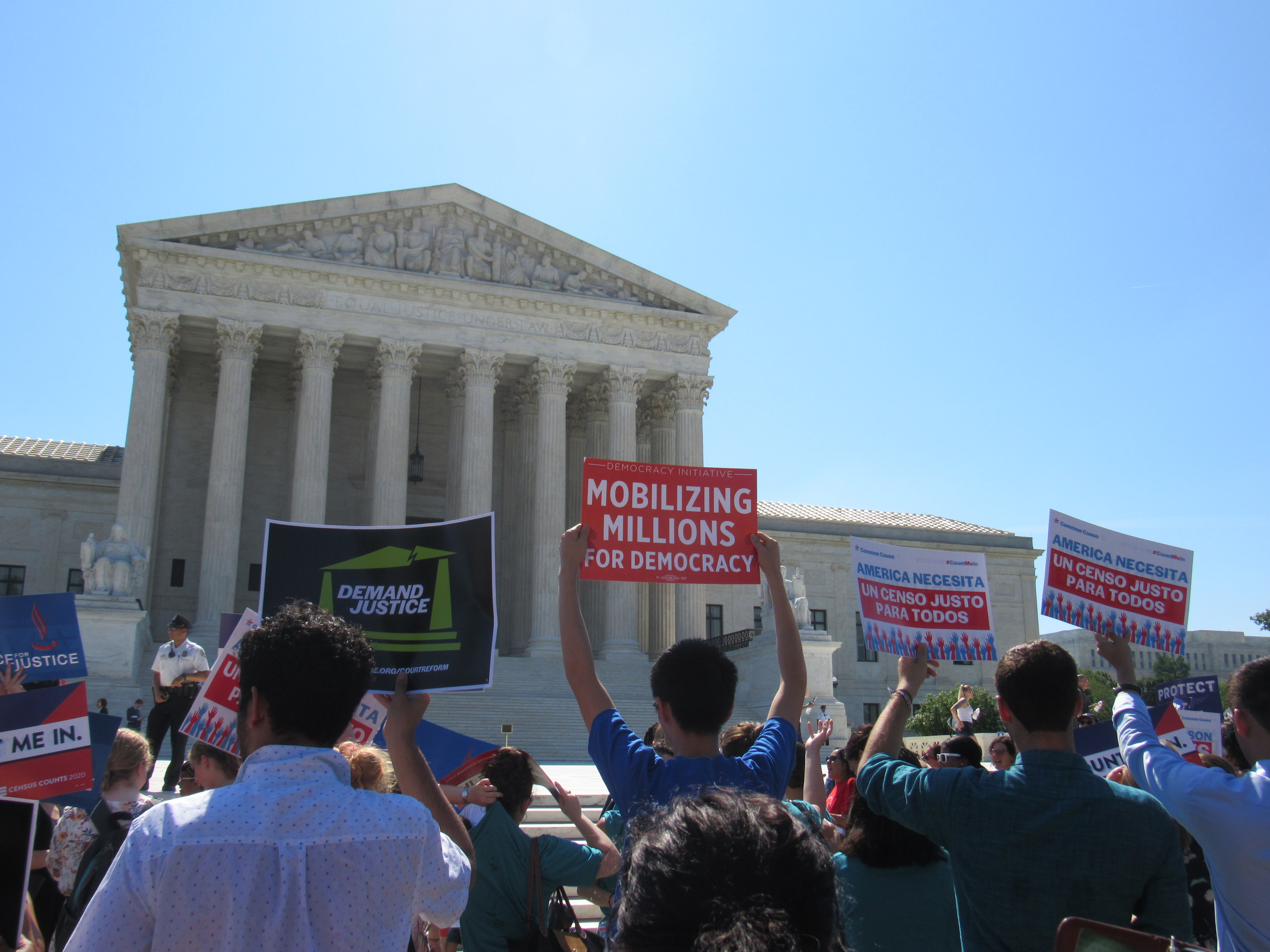 This ruling has consequences for ongoing redistricting in other states as well, like Michigan. Last year, a redistricting reform ballot initiative, led by Voters Not Politicians, won with 61% of the vote in Michigan. Now, SCOTUS' new ruling means new maps probably won't be set until 2022, allowing the grievously gerrymandered maps to remain in place for next year's elections.

In response to SCOTUS' ruling today and in light of its effect on the redistricting process in Michigan, Elizabeth Battiste of Voters Not Politicians gave us the following statement:

"We are dismayed that the U.S. Supreme Court has refused to protect the millions of voters across the country whose constitutional rights are violated by extreme partisan gerrymandering. Michiganders showed that gerrymandering is an issue that impacts all voters, whether we are Republicans, Democrats, Independents or third party supporters. The lower federal courts recognized that, when our political system is broken and our elections are rigged, gerrymandering can and must be stopped by the courts. These anti-democratic practices have run rampant, and today’s decision will only further embolden politicians in the next redistricting cycle. Voters have had enough."

Today's ruling proves that the only ones we can rely on to make change is ourselves. We will continue to stand with partners and fight for redistricting reform state by state, district by district, and make the case for national, lasting reform.

"This is another reminder that we cannot count on the courts to save us. Where we have won is when the people have risen up at the grassroots and demanded fair districts and fair representation. The people of Michigan did not wait for the courts, but demanded and won change when they overwhelmingly voted to pass Voters Not Politicians' initiative last year." 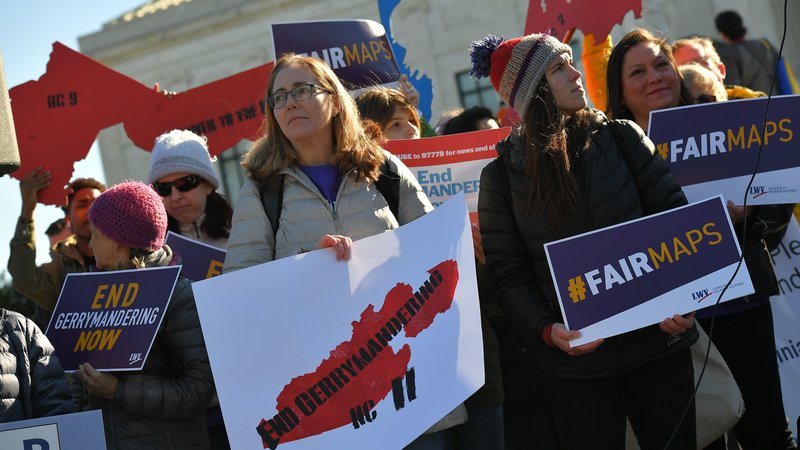 DI Board Co-Chair and Common Cause President Karen Hobert Flynn, offered the following statement as one of the plaintiff organizations in the consolidated case Rucho v. Common Cause:

“Today, five Supreme Court Justices turned their backs on hundreds of thousands of people in Maryland and North Carolina stripped of their voice in Washington by power-hungry politicians.  The Supreme Court had the opportunity to end partisan gerrymandering once and for all but instead a narrow majority chose to wash their hands of the undemocratic practice.

Without recourse to the Supreme Court, the American people must continue to take the battle to the state courts, to the polls, and to the streets, to make their voices heard and to end partisan gerrymandering once and for all.

This decision is part of a disturbing pattern from the Roberts Court of undercutting or eviscerating reforms passed by Congress to protect the integrity of our democracy. This Supreme Court has gutted the landmark Voting Rights Act, shredded campaign finance limits in Citizens United, and now it has condoned extreme partisan gerrymandering.”

"It is a great disappointment to the voters of Maryland that the Court did not set a standard this term when it comes to partisan gerrymandering. Hearing these cases together was important for political balance. In Maryland, Democrats in power created the gerrymandered district to benefit their party. In North Carolina, it was the Republicans. We have seen both parties abuse this process that takes the power away from voters, and unfortunately, this trend may continue. We will continue to look for ways to level the playing field for voters in Maryland.”

Read more about the ruling here.

The Supreme Court’s ruling on the Census is a cautious victory for those who charged the Department of Commerce (which oversee the Census) with misleading the public over their reasons for adding a citizenship question to the Census—which virtually everyone agreed would result in an under-count in communities of color.

While many observers say that there is not enough time for the Department of Commerce to litigate a better rationale for adding a discriminatory question that would lead to damaging under-counts in under served communities, it is also not certain what will happen next. For now, the Census is barred from asking about respondent’s citizenship, but the Supreme Court did not rule that future efforts to add the question are unconstitutional.

Regardless of what happens in future proceedings, the DI, our partners and allies will continue to fight to ensure our communities are fully and accurately counted, so they can receive the federal funding and political representation they need.

DI Executive Director Wendy Fields, in reaction to the Supreme Court's decision to temporarily block the citizenship question from appearing on the 2020 Census, offered the following statement:

"The citizenship question should never have been on the table. This is about justice and about stopping efforts to take benefits and representation away from communities. We will not limit ourselves to seeing today's decision as total victory on this issue—victory is when everyone is counted." 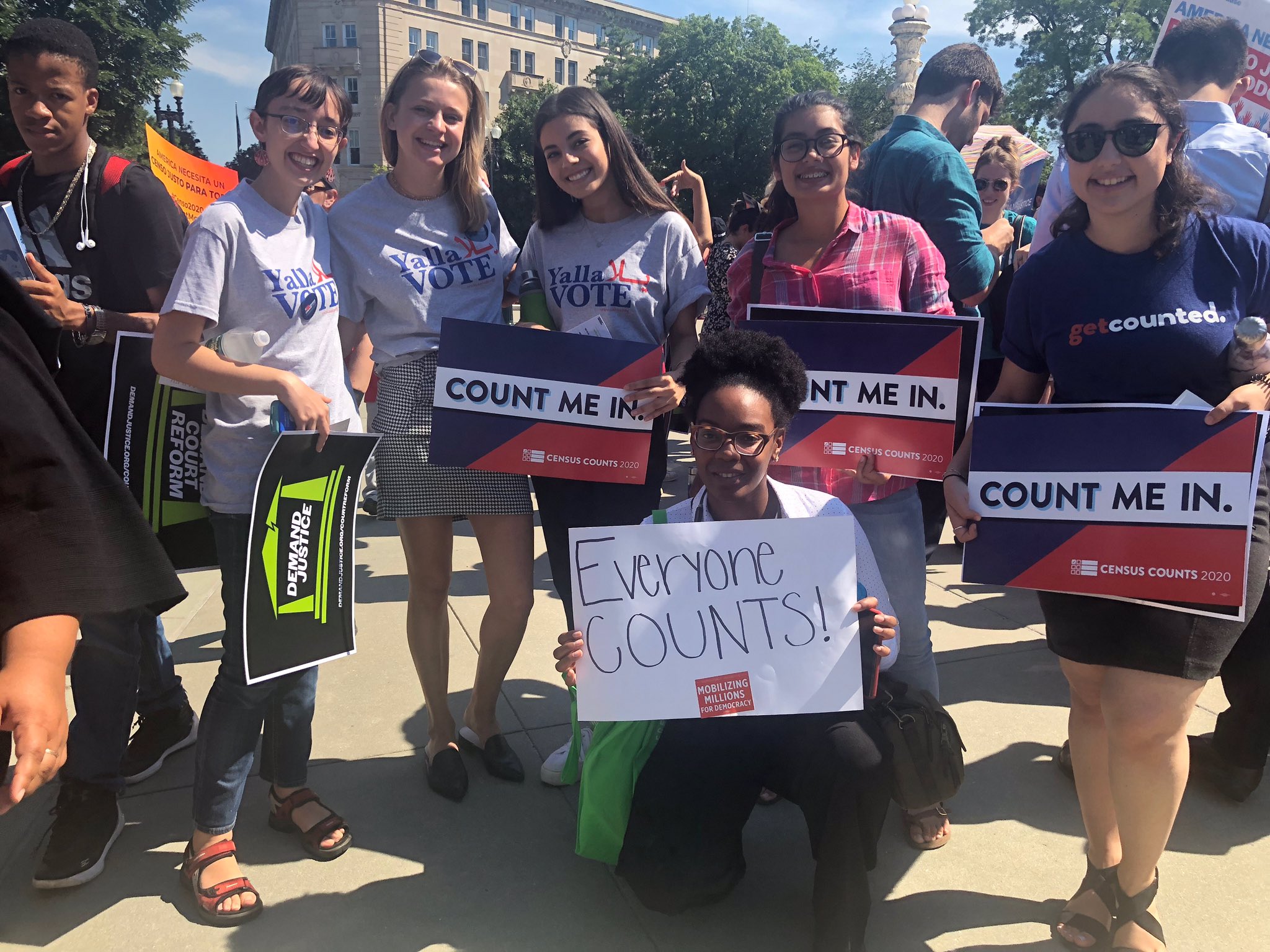 "While we welcome today’s ruling, the fight is not over. Along with our partners, we will continue to combat disinformation and ensure an accurate count of Arab Americans in 2020 through the YallaCountMeIn campaign. AAI remains committed to a fair and accurate census, to free and fair elections, and to supporting our democracy.”

Read more about the current status of the citizenship question here.

SAVE YOUR SPOT NOW!

Spots are filling up fast. Interns from TEN partner organizations have already signed up to attend this event! Don't miss your chance!

On Monday, June 24, the Democracy Initiative joined the DI partners and allies who make up Fair Elections Maryland and Baltimore Councilman Kristerfer Burnett at a presser and hearing in front of the Baltimore City Council Building to introduce legislation for a public financing of city elections. 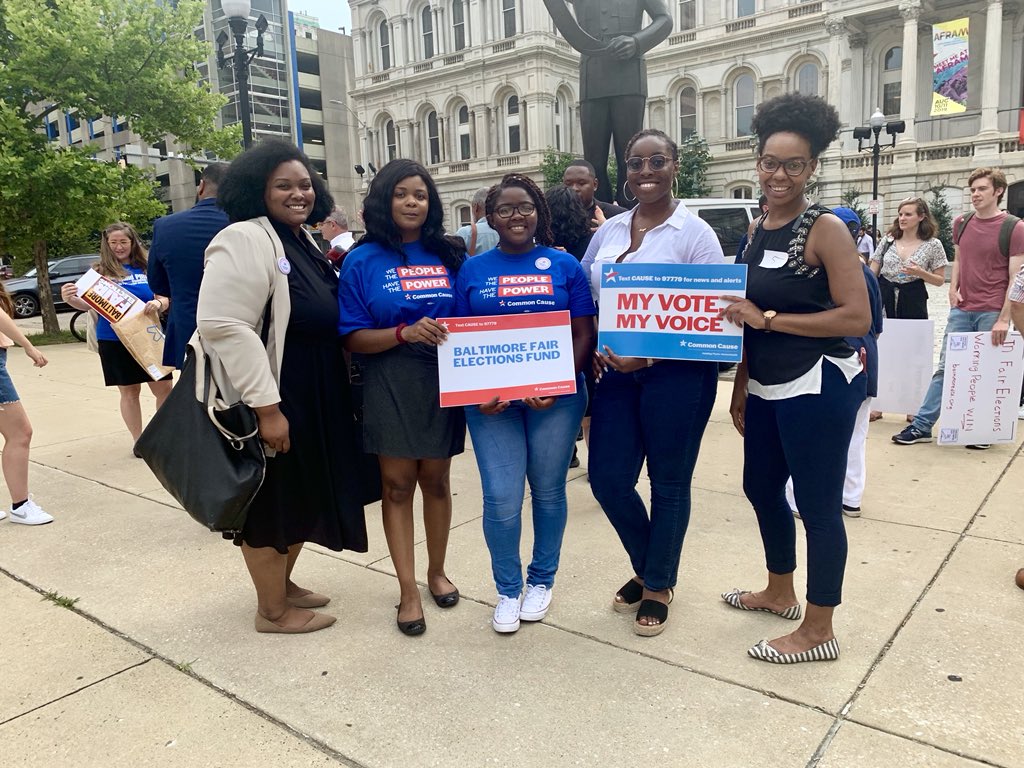 The legislation comes on the heels of Baltimore City voters overwhelming supporting a ballot initiative in the 2018 midterms designed to make candidates for local office accountable to residents, and fight the influence of wealthy special interests and outside money in city elections.

On the subject of the proposed legislation, Councilman Kristerfer Burnett concisely captured the importance of publicly financed elections:

“We want to make sure that there’s a pathway for community leaders and people who are on the ground doing the real work to have a shot to win. We want to force the conversation back into the neighborhoods.”

The DI acknowledges our allies at the Leadership Conference for Civil and Human Rights for their work organizing the Shelby County v. Holder anniversary week actions.

On June 26, hundreds of partners, allies, and advocates rallied outside the Capitol prior to a congressional hearing for the 6th anniversary of the Shelby County v. Holder Supreme Court decision. 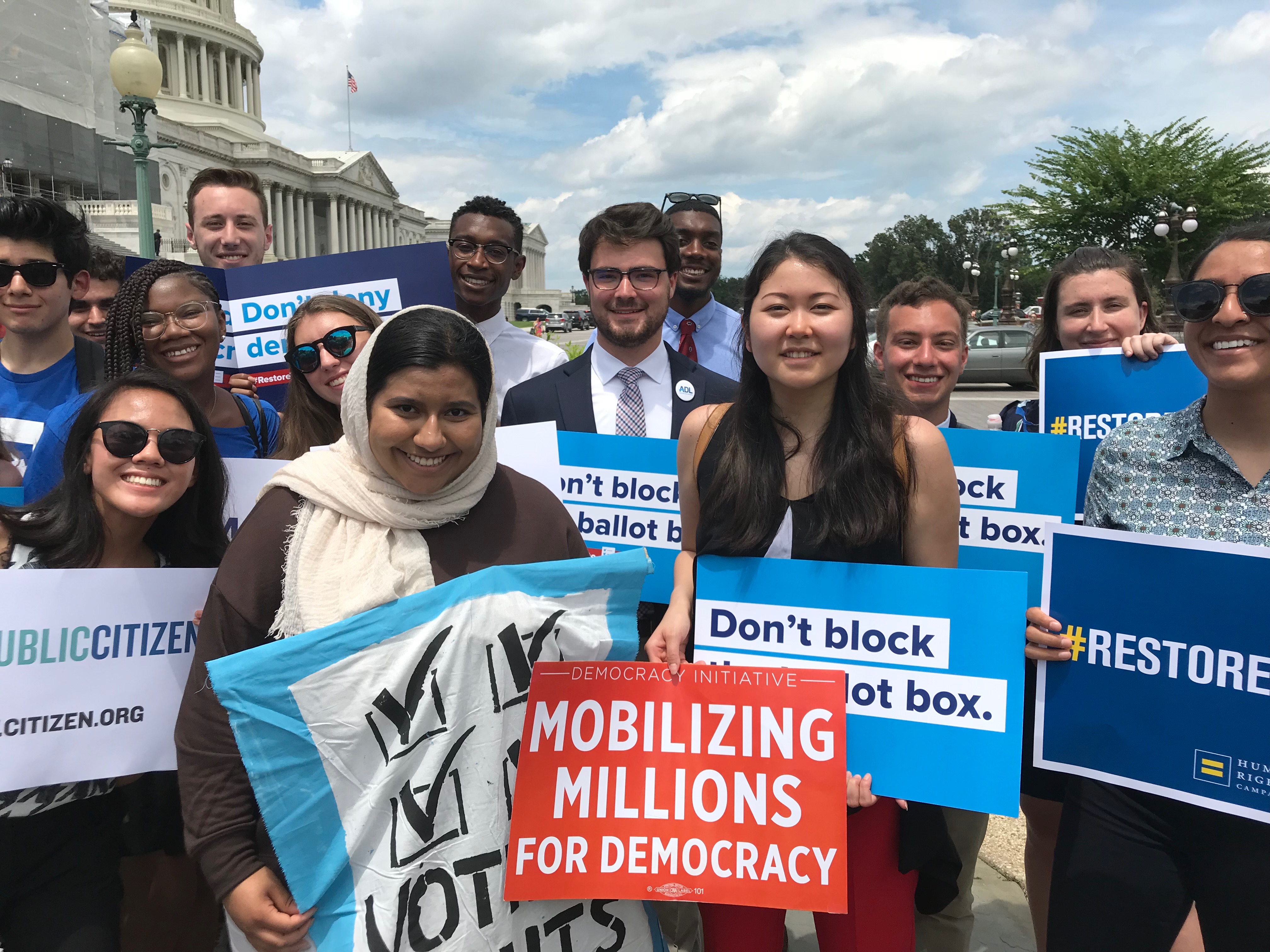 Inside the House Judiciary Subcommittee on the Constitution, Civil Rights and Liberties, representatives and witnesses testified how the Shelby County v. Holder demonstrably led to major civil rights violations and discussed steps to take to guarantee the right to vote and fair representation.

On Wednesday, June 19, Maine Governor Janet Mills signed into law LD 1463, making Maine the 16th State in the country to institute automatic voter registration. AVR will allow Maine voters to register with ease by automatically registering citizens who interact with state agencies such as the Department of Motor Vehicles unless they opt out.

We want to acknowledge DI partner The Brennan Center for Justice's role in advising the drafting process. AVR's momentum across the United States is yet another example of the growing state-based movement for democracy reform, and its latest victory is a win for voting rights and expanded accessibility.