"This will be the day when we shall bring into full realization the dream of American democracy—a dream yet unfulfilled. A dream of equality of opportunity, of privilege and property widely distributed; a dream of a land where men will not take necessities from the many to give luxuries to the few." —Martin Luther King, Jr.

"This MLK Day, let's commit to making 2020 the year to take greater risk to win the greater reward of realizing the dream of American Democracy!" —Wendy Fields 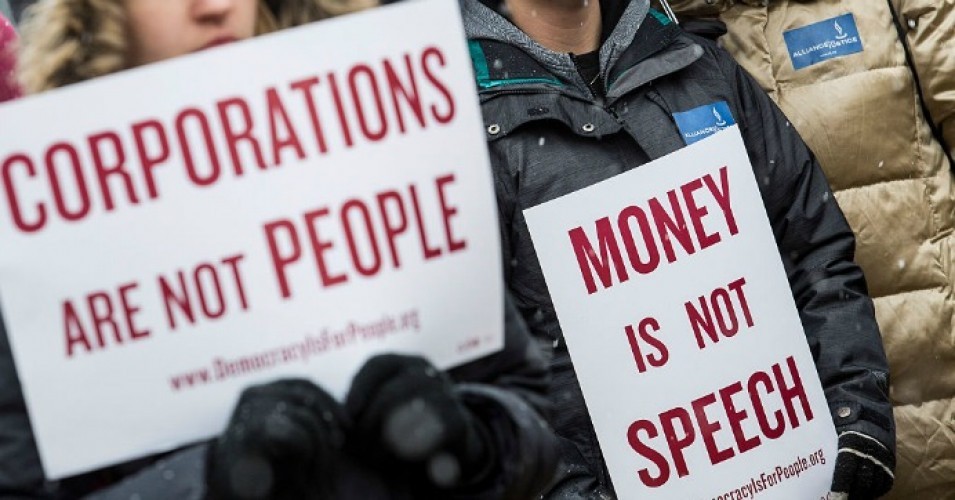 Ten years ago, the Supreme Court of the United States delivered its opinion in the case Citizens United v. Federal Election Commission, the notorious ruling that allowed for the first time in the country’s history corporation to spend unlimited amounts of money in federal elections. According to an analysis of FEC data (via OpenSecrets.org) by DI partner Public Citizen, over 2,200 corporations and corporate trade groups have spent a total of $539 million for the purpose of influencing federal elections. Furthermore, the decision led to the proliferation of “dark money” groups, which are organizations that are not required to disclose information about themselves; since 2010, dark money groups have spent $1 billion influencing our elections that we know about—the real total is undoubtedly higher.

The DI, as a member of the Declaration for American Democracy (DFAD) coalition, is participating in a day of social media action on Tuesday, January 21, marking the ten-year anniversary by demanding an end to corporate personhood. You can find a sample social media kit, courtesy of DFAD, here. Tag us at @Unite4Democracy when you tweet about this on Tuesday and we'll be sure to retweet you.

In that time, however, there has been another movement at the grassroots that is gaining momentum across the country. Nearly four years ago, a diverse mass mobilization of thousands of activists and advocates from nearly 300 labor, environmental, civil rights, and faith organizations descended on Capitol Hill for the Democracy Awakening demonstration, a unprecedented display of solidarity and direct action to demand an equal voice in our democracy. Over the past three years, the reform movement demanding money out of politics, expansion of voting rights, and fair representation has grown rapidly with state and local level victories across the country, culminating in the historic 2019 passage in the US House of the For the People Act (H.R. 1).

H.R. 1 brings dark money into the light, gives small-dollar donors a bigger say in our elections, tightens rules on super PACs, and tightens enforcement by making the FEC work again. Under H.R. 1, anyone who breaks the rules will be held accountable. So far, the Senate has not acted on H.R. 1. It lies in Mitch McConnell's legislative graveyard, along with many other House-passed priorities of importance to DI partners.

As we've seen many local and state democracy wins over the past few years, the American people are clamoring for a fair and inclusive democracy. There is a real opportunity to deliver change, but to realize that promise and be ready to govern in 2021, we must aggressively increase voter participation. DI partners have set the bar high—committing to work toward 75% as an ultimate goal and by fighting for essential reforms such as Vote at Home, Same Day Registration and Early Voting, all of which will make it easier for people to have their say in governance. 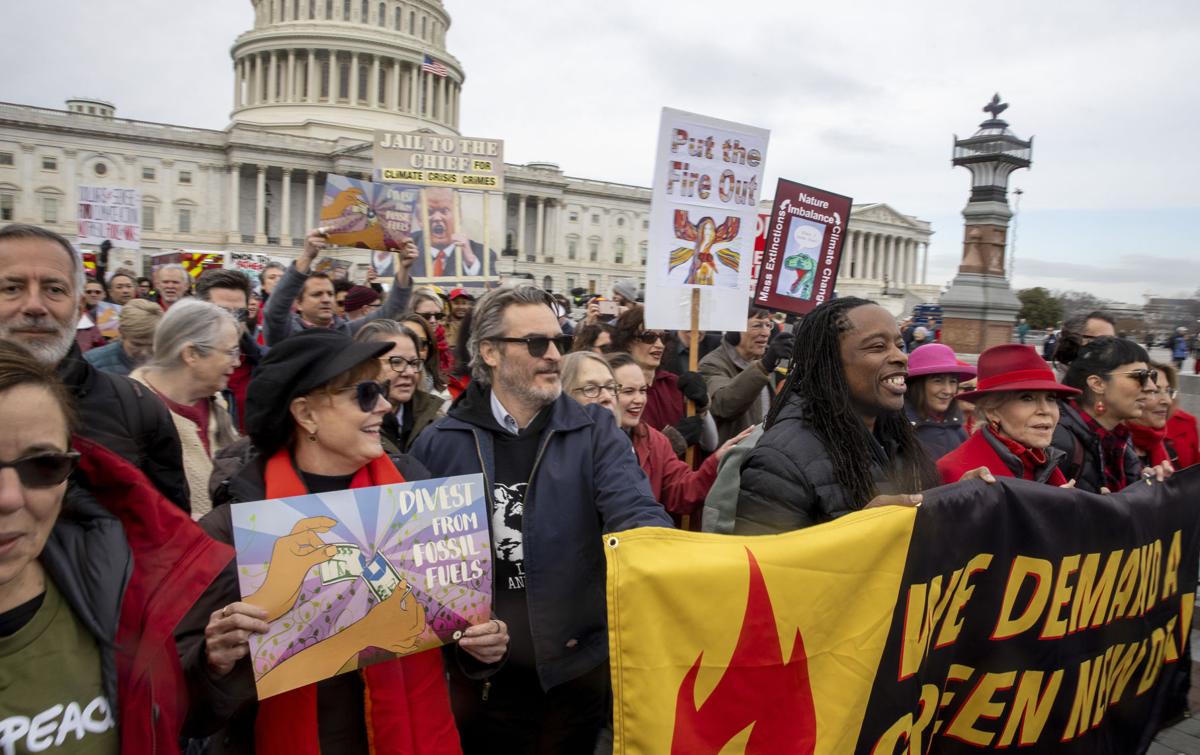 One week ago today, actress and activist Jane Fonda led the fourteenth #FireDrillFriday demonstration in front of the Capitol in Washington D.C., a series of actions demanding that our elected officials take immediate action to address the growing climate crisis; each demonstration is followed by a direct action, where Jane Fonda has joined activists and numerous well-known guests and risked arrest.

DI Executive Director Wendy Fields was arrested at the first ever #FireDrillFriday, and wrote a piece reflecting on the ways in which the climate crisis intersects with the fight to increase voter participation and disrupt the corporate money flooding our politics.

DI Deputy Director Jennifer Lamson was arrested on the steps of the Capitol alongside nearly 150 activists during the January 10 Fire Drill Friday. The majority of those risking arrest, including Lamson, blocked the steps to the Capitol building, while two dozen activists led by Bill McKibben, Senior Adviser and Co-Founder of DI partner 350.org, occupied Chase Bank for their financing of the fossil fuel industry.

Lamson had this to say:

"I recently joined the DI staff after many years of working on environmental issues out of deep concern about handing off to our children a world that is facing inextricably linked twin crises of existential proportion: climate change and the degradation of democracy in the US and across the globe. I've been an activist and an advocate for three decades but this is the first time I've exercised my democratic rights in this way and faced arrest. There were many first of us first-timers there last week, a sign of the times. We also have other important tools at our disposal to reclaim our government from the clutches of the fossil fuel industry and other privileged elites—beginning with massive civic engagement and 75% voter participation in November 2020. Let's do this."

DI Board Member and Friends of the Earth President Erich Pica also participated in civil disobedience on the Capitol steps, and former DI Board Member and Greenpeace USA Executive Director Annie Leonard has been helping to lead the charge on Fire Drill Fridays since day one. Greenpeace is expanding the Fire Drill Friday effort. You can learn more here. 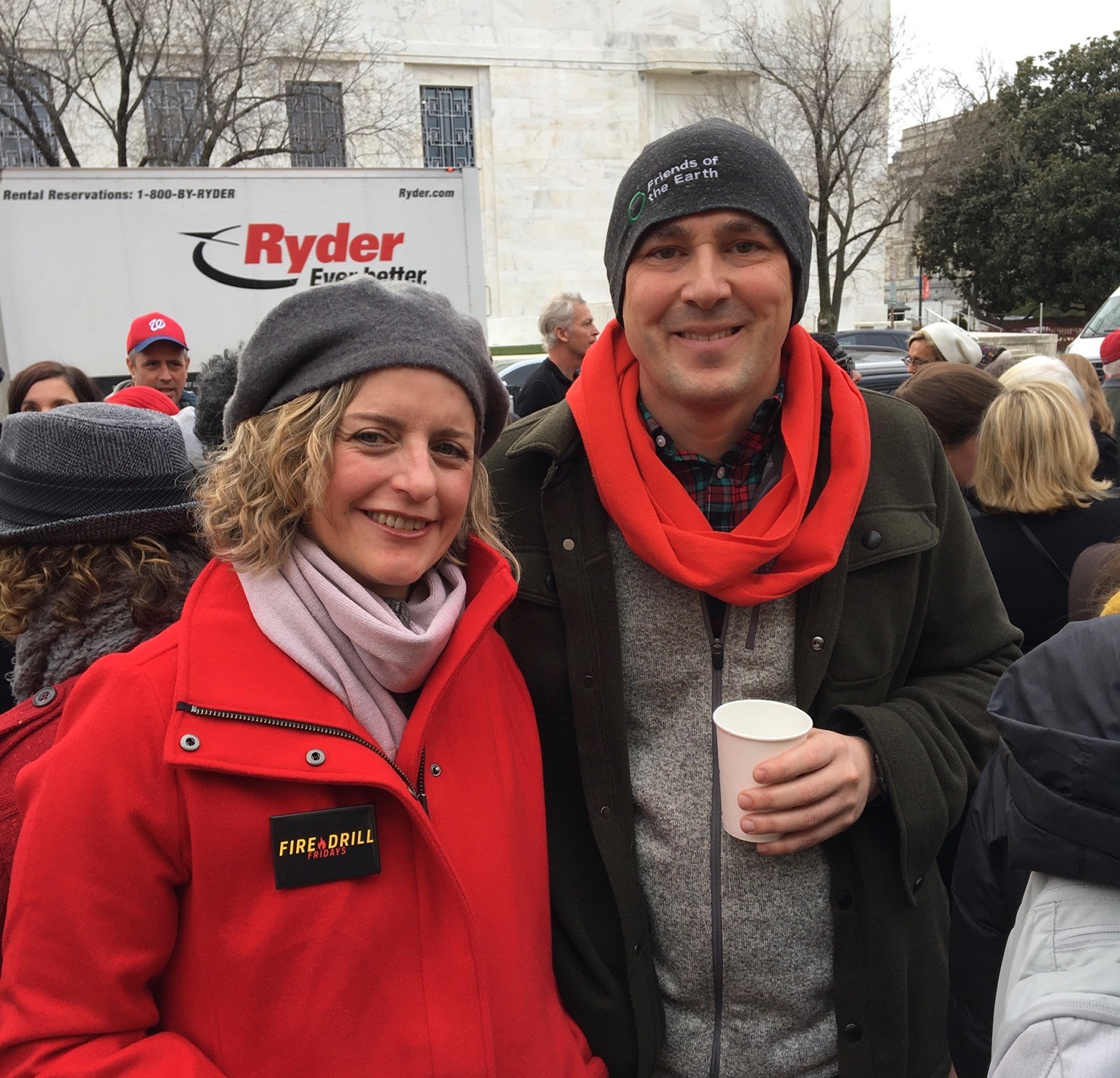 VIRGINIA—THE RIGHT FOR ALL VIRGINIANS TO OBTAIN DRIVERS LICENSESIt was great to see so many of you at our Mobilizing meeting this week.  Things are heating up quickly in Virginia - the Senate passed no excuse absentee (SB111) early voting on Monday, January 13, and the House version (HB1) will be heard on House floor on January 21. If signed into law, it will be available in time for the 2020 General Election. AVR and SDR would be phased in after 2020. AVR and SDR bills have also been introduced. If you want to stay informed on the progress of all these measures, as well as how to engage your Virginia affiliates and members, please sign up here for the DI Virginia work group.

DI anchor partner CASA, along with 32BJ SEIU, New Virginia Majority and many others, have been working for 5 years to ensure that all Virginia residents can obtain drivers licenses, regardless of immigration status. Nearly 100 VA organizations and businesses have signed on to a letter of support for allowing immigrants to qualify for the standard Virginia license. You can also add your Virginia affiliate as a co-signer of the letter by Monday, January 20.

There is an important Senate Caucus meeting coming on the evening of Monday, January 20 where this issue is expected to be discussed. If you have a Virginia affiliate or membership that can be activated, please help get some calls of support on Monday, January 20 into these two key Senators:

Sample Message: We believe in building an equitable Virginia, and this can only be achieved if we don’t create a second class drivers card for some in our community. Ensuring that all Virginians can access the standard drivers license reduces opportunities for discrimination.This is a better approach than establishing a separate system for immigrants, which opens the door to targeting the individuals who would access that separate card. Please become a co-patron of SB643 and support access to drivers licenses for all!

JOIN US—WOMEN'S MARCH 2020The DI is proud to join partners and allies as a partner of the 2020 Women's March, the culmination of over three years of a growing movement uniting against attacks on women's bodies, rights, immigrant communities, democracy, and planet. Programming begins tomorrow morning, January 18 at 10am at Freedom Plaza in Washington, DC.

The Women's March is still asking for social media posts to drive folks to RSVP for the march, and has provided a social media toolkit to assist partners that you can find here.

We look forward to seeing you there.

The letter specifically calls for a single Commissioner, as opposed to a full slate, to be appointed in order to allow the FEC to conduct its business in the period leading up to the 2020 elections. The letter argues that a full slate of six new Commissioners that includes nominees who are opposed to the mission of the agency would only serve to hamstring the FEC’s enforcement of election laws.

PARTNERS HOST WE THE PEOPLE 2020 FORUM WITH PRESIDENTIAL CANDIDATES IN IOWAOn Sunday January 19 at 3:00pm Central time, Huffington Post will join with DI partners and allies Common Cause, MoveOn Political Action, NAACP, PFAW, Public Citizen and others to host We The People 2020: Protecting our Democracy a Decade After Citizens United.

The forum, which will be attended by Democratic presidential candidates Mayor Pete Buttigieg, Senator Amy Klobuchar, former Governor Deval Patrick, and Senator Elizabeth Warren, will discuss the candidates’ plans for structural reform to our democracy, especially concerning getting money out of politics, protecting the right to vote, and ensuring equal representation.

You can find the livestream here. 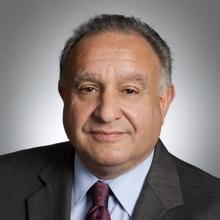 Former DI Board Member and longtime democracy advocate Miles Rapoport’s latest for American Prospect, “Not a Typo: States Made 2019 a Historic Year for Election Reform,” provides a refreshing reminder of the crucial, mounting gains made by states across the country in the fight for a truly inclusive, fair, representative democracy.

“As states like Texas and Georgia continue to make headlines for their extreme efforts to limit voting, a far greater number are actually going the other way. In fact, 2019 saw more states advance more election reforms than at any time since the progressive era of the early 20th century. Pro-voter policies ranging from same day registration, automatic voter registration, and voting rights restoration to redistricting reform and the National Popular Vote compact saw breakthrough gains.

While most of these reforms were enacted in states controlled by Democrats, in several states where Republican governors or legislators had acted to suppress the right to vote in 2016 and 2018, reforms were nonetheless enacted in 2019.”

WISCONSIN—ORDER TO PURGE 209,000 VOTERS HALTEDOn Tuesday, January 14, a Wisconsin court of appeals halted an order to purge immediately up to 209,000 voters from the state’s rolls. The original case was brought to court by the Wisconsin Institute for Law and Liberty, a conservative law firm and member of the State Policy Network (SPN)—the policy, communications, and litigation arm of the Koch-funded American Legislative Exchange Council (ALEC). The firm tried to force the purge to happen immediately, clearing the voting rolls of 6.3% of the state’s registered voters in time for the 2020 elections.

DI partner League of Women Voters of Wisconsin, alongside the bipartisan state elections commission, successfully filed suit to halt the purge, with the intention of allowing the state election commission to proceed with their plan to revisit the issue after the 2020 elections.