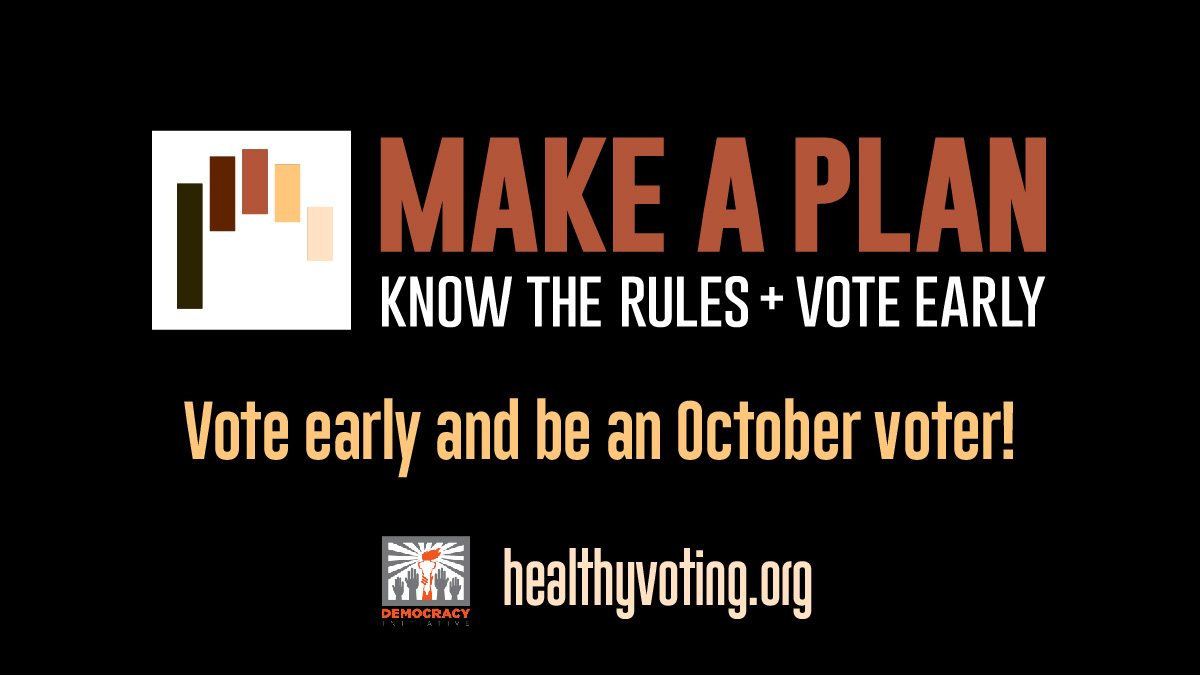 The stakes have never been higher for our democracy.

The 2020 General Election has already begun, with voters across the country casting their ballots. As we’ve seen recently in the first debate and elsewhere, the combination of new voting rules in many places and ongoing attempts to sow chaos and fear make it more important than ever for voters to know the rules, make a plan, and vote early.

We are asking the principal leaders of all Democracy Initiative (DI) partners to create and share with your members a simple video with key voter education information. To help make that easy, DI staff have created this simple toolkit with everything you need to make and share a great video message. Porter McConnell, Campaign Director of DI partner Take On Wall Street, has recently created an excellent video to use as an example.

DI partner organizations are leaders and trusted voices in the fight for social justice and our democracy. In this unpredictable election season, in which counting votes may continue for days or weeks beyond November 3 due to the surge in mail ballots, which just take longer to process, it is critical to provide key information for our collective 45 million members and supporters.

TAKE ACTION: BE AN #OCTOBERVOTER 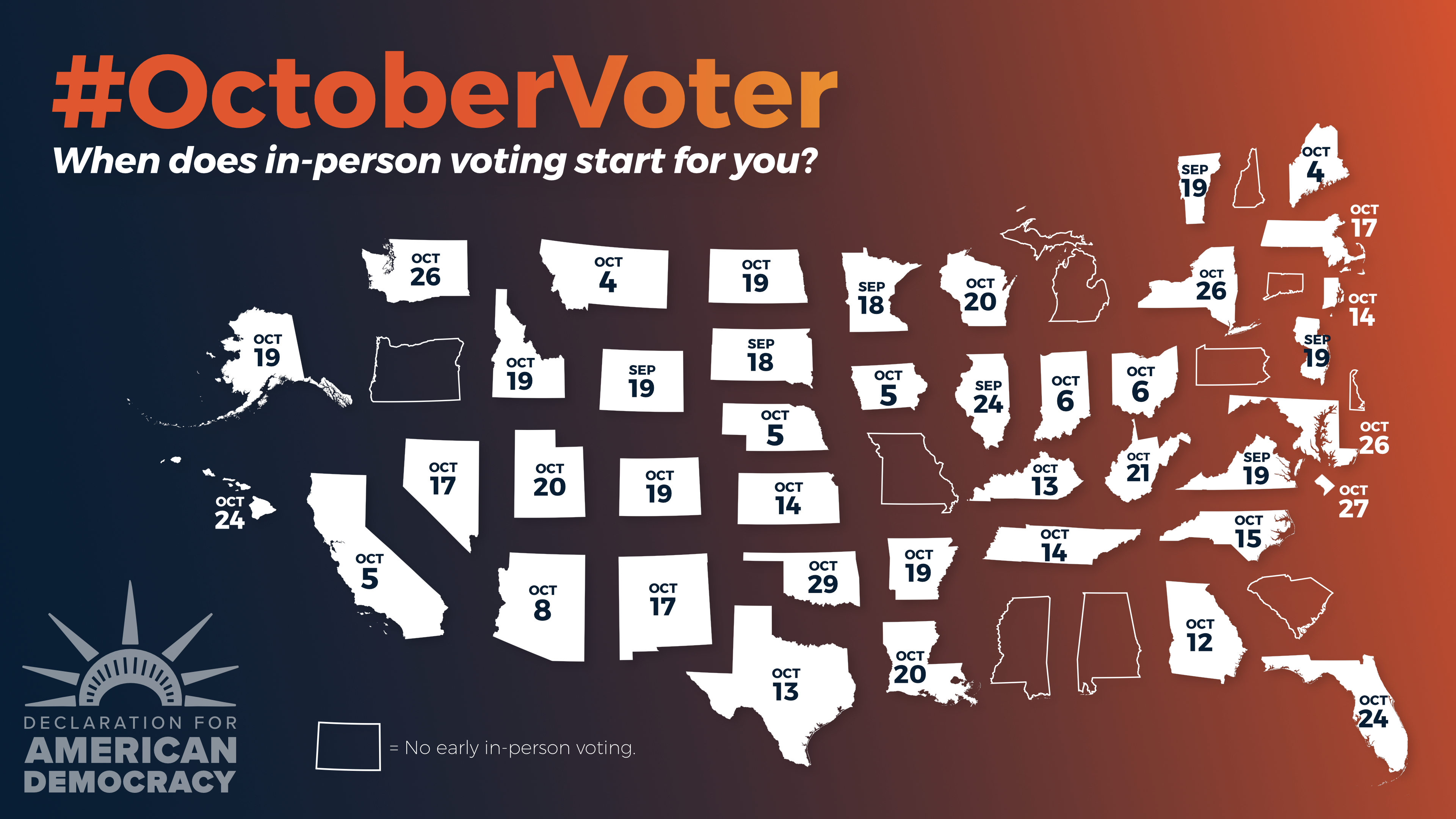 Over 60 partner organizations and allies participated in the October Voter launch yesterday, a social media initiative designed to encourage our members and supporters across the country to join the over 2 million Americans who have already voted this general election season. With new voter laws in effect in response to the coronavirus pandemic, there’s never been a better time to make a plan to be an #OctoberVoter.

The DI Make a Plan social media toolkit includes an #OctoberVoter graphic for Facebook/Instagram and Twitter. In addition, we have collaborated with Declaration for American Democracy, Election Protection, and the Leadership Conference on this shared toolkit of #OctoberVoter sample posts and graphics.

FIGHT THE POWER-GRAB AND FIX OUR BROKEN SENATE

The speakers made the case for the elimination of the filibuster to put an end to partisan gridlock in the Senate in order to begin the work to restore our democracy and make progress on critical issues facing our country, like the climate crisis, racial justice, immigration, healthcare, income inequality and more. We’ve reproduced key remarks of Tefere, Derrick, Erich and Gustavo below: 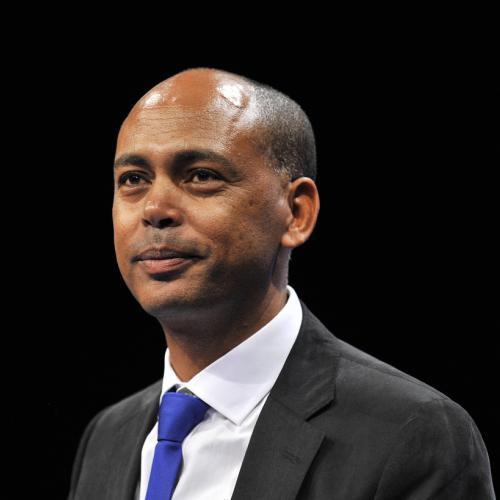 “There is much that needs to be done. From the perspective of working people, this has been going on for decades and decades. In the early 1990s we were told that if we elect progressives to the House and Senate, we would get anti-strike replacement legislation. It never happened. The excuse was the filibuster. Again in 2009, a year of hope and change, we never got the Employee Free Choice Act that would have leveled the playing field for working people. Again because of the filibuster and fear of the filibuster. Sisters and brothers this is serious [...] what is the point of winning elections if we can’t govern after we win? This is what this fight is about. For us that means activating the movement within the labor movement and that is our labor councils. And, I am proud to say [...] we have a bunch of labor councils who are ready to go to work.” 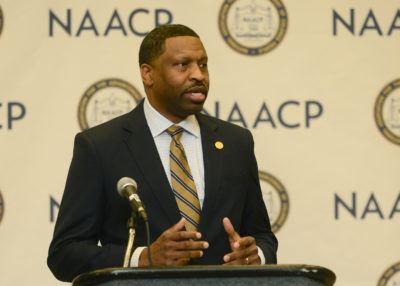 “Senate Rules have long been used as a tool to impede progress, primarily by southern Senators who’ve seen threats where there are no threats, particularly giving rights to African Americans. [...] It was the Senate Rules that weakened the Civil Rights Act and prevented the Voting Rights Act from moving forward. The filibuster has been a tool to impede progress on civil rights for African Americans, to impede progress on making sure this is a more inclusive democracy that is representative of all of our interests. That’s why we must revise the rules—the king of which is the filibuster—so we can stop the block of the South from creating an unequal nation, so we can get to a more perfect union where equal protection under the law is afforded to all citizens.” 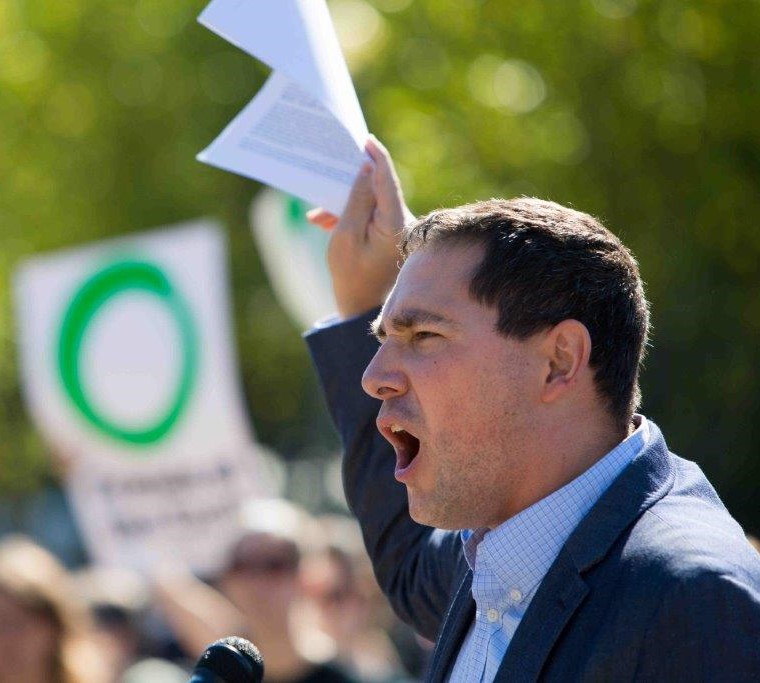 “We’ve had Hurricane Katrina, Hurricane Sandy, flooding in the Midwest, droughts in the Midwest, and now fires across the west. We’re in the midst of the climate crisis. And the solution is passing broad-based legislation—like the Green New Deal or taking away subsidies to the oil industry—that has been stymied for the last 10 years because of the filibuster in the Senate. We can’t have Mitch McConnell there doing the business of the fossil fuel industry with his filibuster blocking legislation that millions of people are mobilizing for […] I believe strongly that we as an environmental group need to throw down behind these efforts to make the Senate work by fixing the filibuster because we’re not gonna get done what we need to do if the filibuster is there being used by the fossil fuel interests championed by Mitch McConnell to block policies that would set our country on the course to reduce our GHGs and solve the climate crisis. We all need to be throwing in to this fight together.” 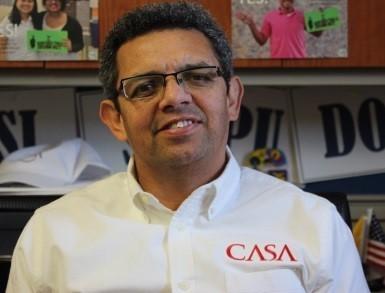 “We tried to pass the Dream Act in 2010 for undocumented youths—who by the way pay more taxes than Trump. We had a majority in the Senate but it was killed with a Republican filibuster. There is so much we need to do right now to protect our communities, keep our families together and finally pass the immigration reform our country needs. But if we don’t fix the Senate we are just going to get blocked again and again. To us this isn’t about Senate Rules, it’s about our lives, our families, our communities.”

The rush to fill Justice Ginsburg’s seat on the Supreme Court as voters have already begun casting their ballots for the 2020 General Election, and while the second coronavirus relief package, the HEROES Act, and other critical legislation languishes in McConnell’s Senate legislative graveyard, reminds us that the stakes are clear. It’s time to organize to ensure nothing prevents the American people from taking a seat at the governing table in 2021.

The fight to fix our broken Senate is ramping up, and your organization’s members are a critical to ensuring the American people have a seat at the governing table in 2021. Please encourage your members to pledge to work for Senate rules reform in their own state. You can use Fix Our Senate’s petition page or create your own pledge page by following the guide in this toolkit.

Recent news coverage has reflected the growing momentum for Senate rules reform. DI board co-chair and AFL-CIO Executive Vice-President Tefere Gebre’s remarks from the Fix Our Senate live-stream were quoted in a recent article for The New Republic, and Vox’s Ezra Klein published on October 1 a comprehensive examination and debunking of every argument in favor of keeping the filibuster. As we approach 2021, the grassroots demand for a Senate that governs only continues to mount.

Senate Rules Reform is one of the democracy issues that brought the DI’s cross-sector coalition together back in 2012 and again at the 2019 DI Annual Meeting, because out-of-control obstructionism was blocking progress on the issues our 75 partner organizations—representing 45 million people—care about. There is strong public support for our shared values of inclusion and justice and opportunity for all. Policies built on those values can meet the challenges we face. We must ensure that the Senate can govern so America can rise to this moment.