STATEMENT: Trump’s Attempt to Exclude Immigrants FROM THE CENSUS

On Tuesday, July 21, President Trump issued a memorandum calling for the exclusion of undocumented immigrants from the constitutionally mandated count of persons residing in the United States for the 2020 Census. The memo is the latest in a series of attempts to tamper with the Census in order to affect the count that determines Congressional representation and billions of dollars in funding for communities.

“Donald Trump doesn’t know how to count. We do.

“The U.S. Census is required to count everyone; there is no provision for excluding people the current president doesn’t like. We stand with our allies in the civil rights community, and we will not allow this administration to disrupt the Census.”

Led by DI partner Common Cause, several advocacy groups filed suit against Trump on Thursday, July 23 in response to the memo. In a statement, Karen Hobert Flynn, DI Board Co-Chair and President of Common Cause, said:

“The Constitution is unambiguous in its requirements relating to the census count and reapportionment of Congressional seats—all persons must be counted. This directive simply ignores those requirements in an unconstitutional attempt to manipulate the process for racial advantage and partisan political gain.”

There is still time to take action in support of federal funding for safe and equitable elections!

If your organization hasn’t sent out an alert yet, now is a good time to do so. We expect Senate Republicans to soon announce a proposal for COVID emergency funding. Even if the first version of their bill includes some election funding, we will need to keep up the pressure as they head into negotiations with the House, who have already passed the HEROES Act, which includes the necessary $3.6 billion for elections and $25 billion for the USPS. We will keep you posted as the negotiations heat up, but please activate your members and social media channels now!

Here’s how you can take action:

These are the key points to make in communications to key Senators:

If your organization is taking action please or if you have any questions about this action, please contact DI National Field Manager Getachew Kassa at gkassa@democracyinitiative.org.

UPLIFT OUR PARTNERS ON SOCIAL MEDIA 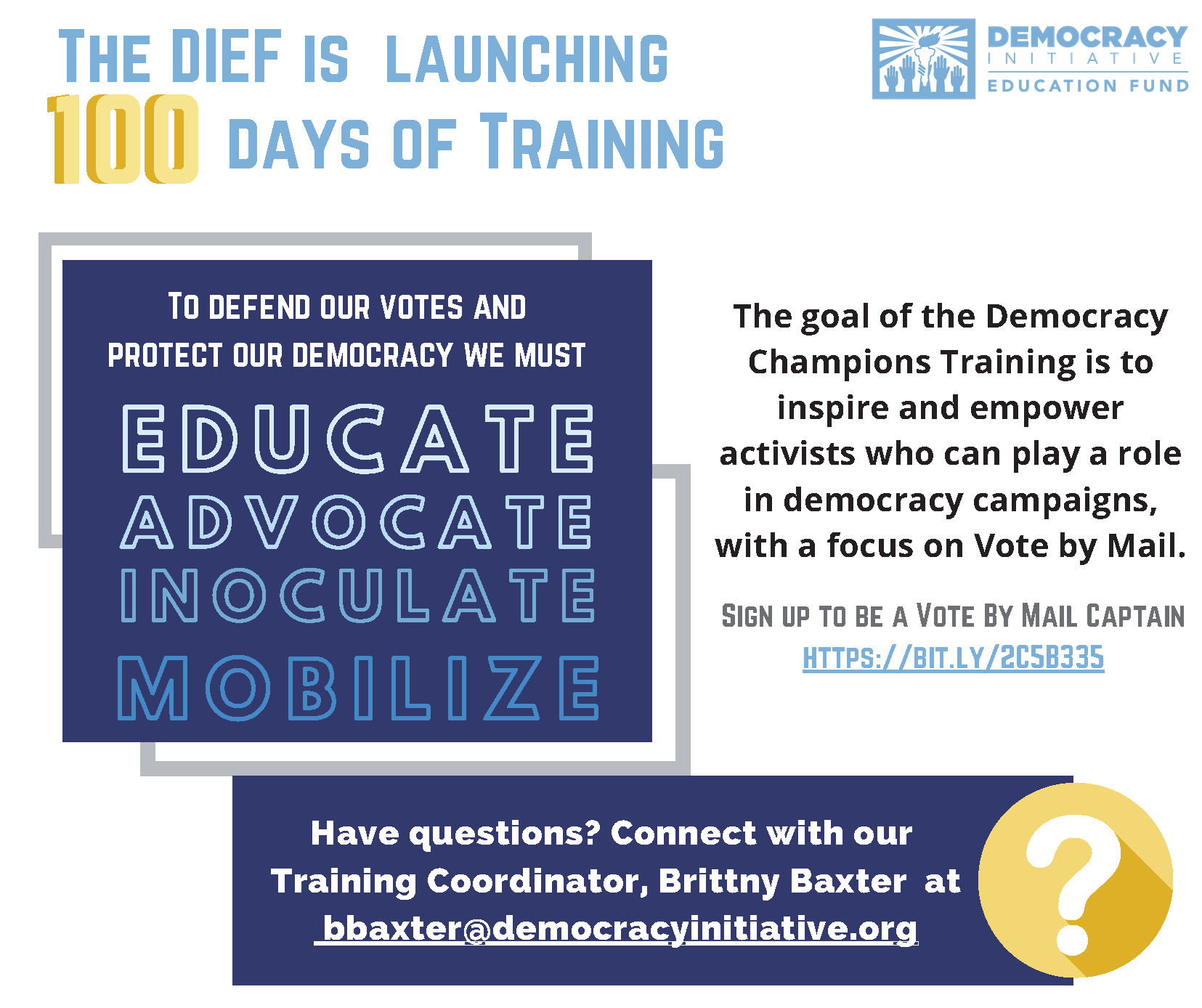 The Democracy Initiative Education Fund (DIEF) has launched its virtual Democracy Champions: Vote by Mail Edition training series. On Sunday, July 26, the DIEF is launching our 100 Days of Training, a massive push to recruit, train, and place a diverse and motivated set of volunteers in key roles. If you have affiliates, activists, or members in FL, GA, MD, MI, MO, NC, NM, PA, VA, and WI, we encourage you to sign up to host a training.

Our standing training dates for the remainder of the cycle are as follows:

We are happy to consider other times if these slots don't work for your members.

BAYARD RUSTIN FELLOWSHIP
The application deadline for the Bayard Rustin Democracy Fellowship Program is fast approaching! This year we will be hosting two fellows: A Training and Movement Building Fellow, who will help support the 100 Days training initiative, and a Digital Campaigner, who will support the Vote by Mail campaign’s organizing efforts online. The deadline to apply for either position will close Monday, July 27. If you know of someone who would be good for this position, please encourage them to apply by Monday!

For questions, connect with Brittny Baxter at bbaxter@democracyinitiative.org. 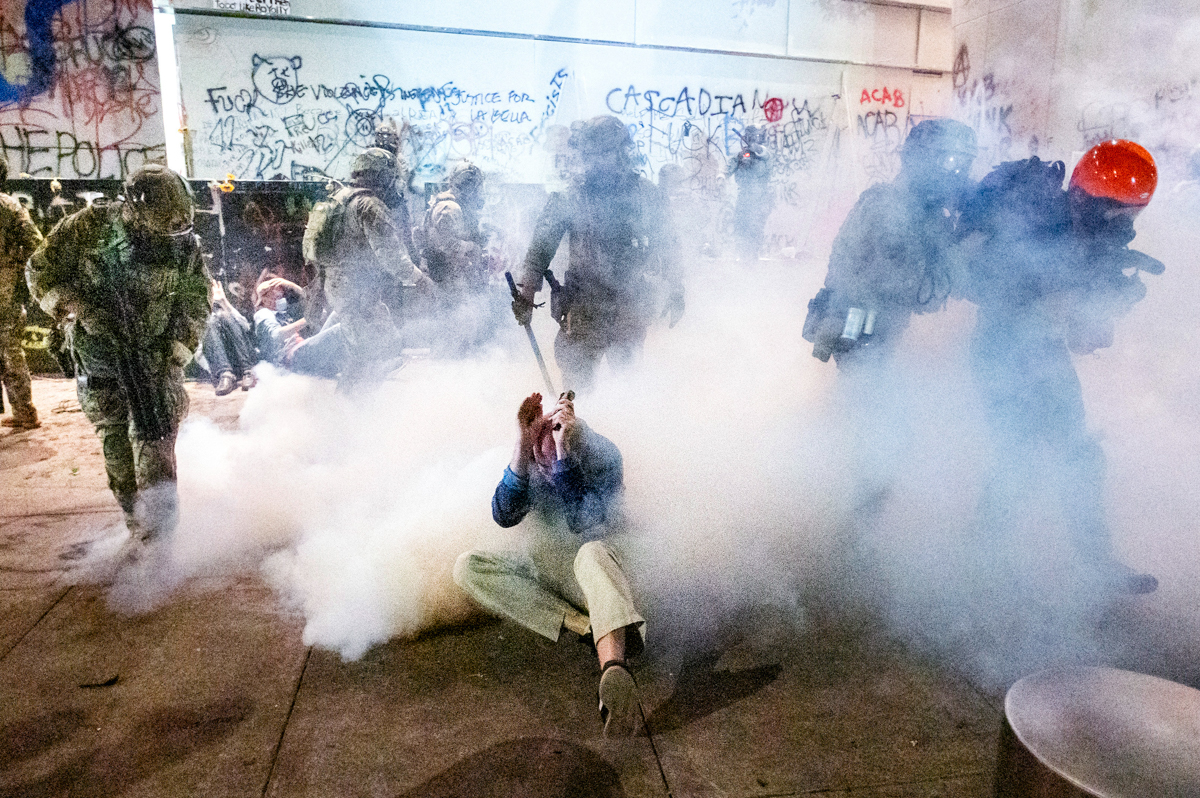 In response to the Trump administration’s deployment of federal agents to Portland and other major cities, Defending Rights and Dissent (DRAD) and National Coalition Against Censorship (NCAC), alongside 50 advocacy and issue groups, issued a statement condemning the action. The Democracy Initiative is a proud member of DRAD, and we have written elsewhere on the importance of defending the right to demonstrate and taking collective action to the democracy movement.

In the joint statement, the groups wrote:

“The use of unidentified militarized federal forces against the wishes of local officials, the exercise of excessive force against peaceful demonstrators and the seemingly arbitrary detention of some of them without a clear reason for arrest are designed to intimidate protesters into surrendering their First Amendment rights.

“We condemn these practices. We call for all unwanted federal forces to be removed from Portland and urge Congress to investigate the pattern and practice of abuses against protesters.”

Liz Butler, Vice President of Organizing and Strategic Alliances at DI partner Friends of the Earth, gave the following statement:

“Friends of the Earth condemns Trump’s authoritarian crackdown in Portland, where unaccountable federal forces are deliberately escalating the situation to justify violence against protesters. It is disturbing to see Trump deploy the brutal tactics of dictators he has publicly praised to stomp out opposition here in the U.S.

Horrifyingly, Trump has stated that his action in Portland is part of a deliberate plan to expand state-sponsored violence in cities across the country. Trump named a number of additional cities he intends to deploy unaccountable federal forces to shortly as a part of ‘Operation Legend.’ This escalation of tactics, targeted at Black Lives Matter protestors, should raise deep concerns for environmental and climate activists and anyone committed to our democratic institutions.

There is cause for hope. Instead of being intimidated, people from across the region, including thousands of moms, have flooded the streets of Portland to defend the right to protest. We will need heroes like this in the coming months to defend our democracy.

The right to protest is fundamental to our efforts and our democracy. We must collectively condemn these violent tactics.”

“The increasing number of attacks on our democracy by some elected leaders and appointed members of our government are violating the first amendment rights of people in this country and requires our organization to speak out against the actions of this administration.

“On Tuesday the U.S. Department of Homeland Security’s Customs and Border Protection division confirmed that it deployed officers from three paramilitary-style units to act against protestors in Portland, Oregon. Dressed in unidentifiable military gear, in unmarked vehicles, our government unleashed a wave of fear and intimidation against people executing their Constitutional right of free speech.

“This administration’s tactics all too closely resemble authoritarianism. We have seen out of control leaders, past and present, who have used their power to intimidate, attack, or arrest their opponents in the name of ‘law and order.’ These actions are unpatriotic and un-American.

“The League of Women Voters is calling on the President and his administration to put an end to these unconstitutional acts. We also call on Congress to exercise its power to hold the administration accountable, immediately investigate the Department of Homeland Security and any other government agency involved in these heinous acts, and stand up for American democracy.

“The League of Women Voters is a non-partisan organization whose mission is to empower voters and defend democracy. We neither support nor endorse candidates or political parties. For 100 years the League has stood firm in the belief that government has a responsibility to represent and serve the interests of the people, not individuals in power.”

DECLARATION FOR AMERICAN DEMOCRACY LETTER FOR COVID ELECTION FUNDING
The DI joined the Declaration for American Democracy (DFAD), of which we are a proud member, and 30 other partners and allies in calling for the Senate Committee on Rules and Administration—the Senate committee in charge of allocating election funding—to support the $3.6 billion in emergency election funding proposed in the HEROES Act in a letter sent on Tuesday, July 22.

You can read the letter here.