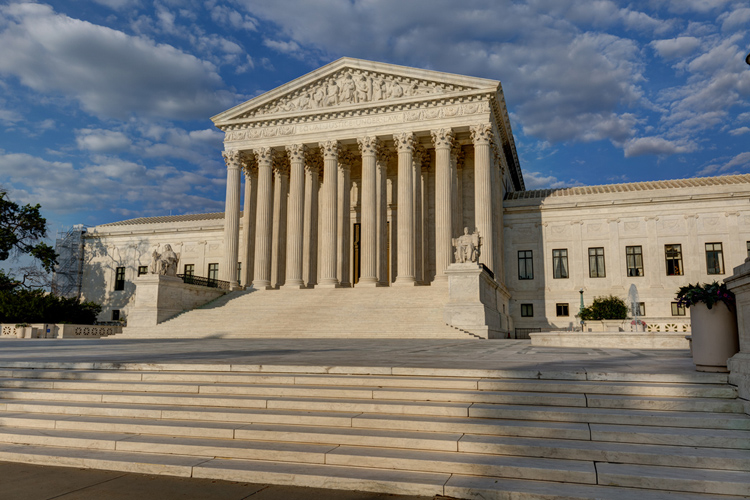 The Supreme Court of the United States ruled on Thursday, July 9 in two cases regarding the president’s continued attempts to avoid releasing his financial records to the American public. SCOTUS ruled 7-2 in both cases that Trump cannot ignore subpoenas of his financial records issued by Congress and from the Manhattan District Attorney’s office. SCOTUS’ decisions, however, make it unlikely that Trump’s tax records will be seen before November; rather than to grant the validity of the subpoenas, both cases were remanded back to the lower courts for further proceedings—giving Trump’s lawyers a chance to stall.

“It’s good news that the U.S. Supreme Court has ruled that no one – not even Donald Trump – is above the law. Like anyone else, President Trump is obliged to provide information about his tax returns and other financial records in response to legitimate inquiries from the U.S. Congress and state prosecutors.

“It’s troubling, however, that the president’s lawyers have stated that they will continue to delay these proceedings as long as possible. It is time to stop stalling with lawyering tricks and live up to his commitment to share the taxes. The voters deserve full transparency on his finances. As he runs for re-election, we have a right to know about potential conflicts of interest.

“President Trump is making life and death decisions that affect us all every day. He needs to prove that he makes those decisions based on the best interests of the American people, not for his own personal interests."

Last week, the fossil fuel industry suffered a trio of stunning setbacks. The striking victories for Indigenous water defenders, grassroots organizing, and environmental justice offer hope that the fossil fuel industry’s stranglehold on our government can someday be broken. As we’ve written before here and here, achieving a comprehensive, renewable energy economy will require reforming our political system to reduce the power of money in politics and expand voter participation. No one knows this better than DI’s environmental partners: 350.org, Center for Environmental Health, Clean Water Action, Friends of the Earth, GreenLatinos, Greenpeace USA, League of Conservation Voters, National Resources Defense Council, Oil Change International, Sierra Club, Story of Stuff Project, and Waterkeeper Alliance. Read on for more on the wins and how this fight is inextricably linked to ensuring free and fair elections with safe voting in the face of COVID-19. 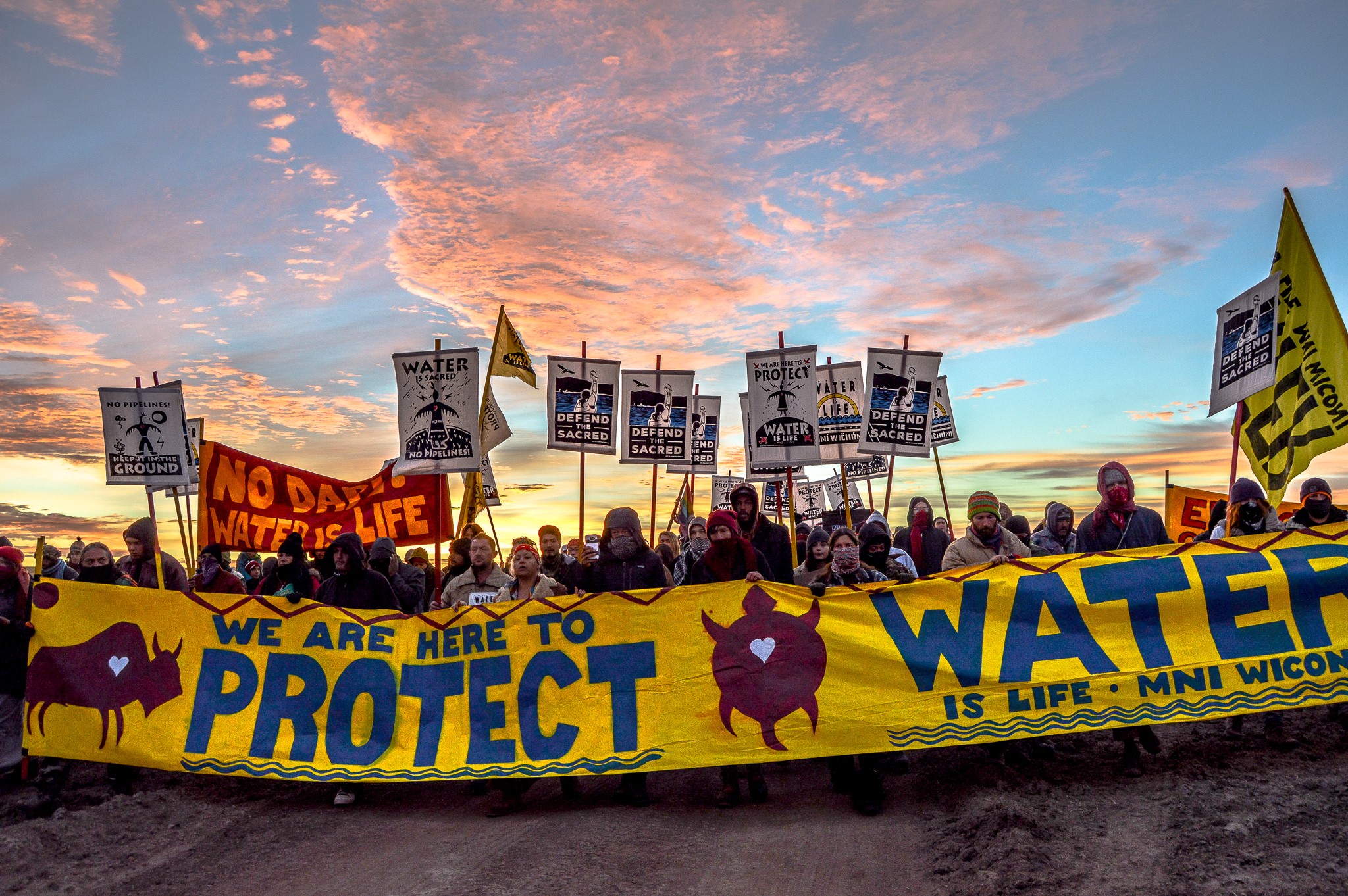 In the face of sustained grassroots activism, Dominion and Duke Energy cancel pipeline

US Dept of Energy Secretary Brouillette credited environmental activists for the July 5 announcement by Dominion Energy and Duke Energy to abandon the $8 billion Atlantic Coast Pipeline (ACP) project. Grassroots organizers pointed to this as a win in the struggle for environmental justice and local communities to have a say in matters that affect their lives. In a press statement, Donna Chavis, senior fossil fuel campaigner for DI anchor partner Friends of the Earth and an elder of the Lumbee Nation, described the magnitude of the (ACP) decision:

"Native American, African American, and other affected communities along the route of the Atlantic Coast Pipeline have prevailed in their David versus Goliath struggle against Duke Energy and Dominion Energy. The ACP is now officially dead, and not a moment too soon.

Americans have spoken in the streets, and they have no tolerance for fossil fuel projects that poison the bodies, the land, the air, and the water of Indigenous, Black, and Brown communities."

On Monday, July 6, a federal judge ruled that the Dakota Access pipeline (DAPL) must cease operation and drain the fuel from its pipelines by August 5 due to the failure of the U.S. Army Corps of Engineers to carry out a complete analysis of its environmental impact. Then on Monday night, the U.S. Supreme Court rejected an attempt by the Trump Administration to overturn an April ruling by a Montana judge blocking the Keystone XL pipeline.

The DAPL ruling marks a turning point in a four-year litigation battle brought by Standing Rock Sioux, Cheyenne River Sioux, and others against the U.S. Army Corps of Engineers. As Janet Redman of DI Anchor partner Greenpeace USA said, “The past 24 hours have sent a loud and clear message to fossil fuel corporations still committed to constructing dangerous pipelines—the future does not belong to you.”

The DAPL victory in court could not have happened without the struggle of Indigenous people and their allies for their land, their water, and their communities. As Policy Director Mitch Jones of DI partner Food & Water Watch said:

"The campaign to stop the Dakota Access pipeline, led by Indigenous groups whose water would have been directly impacted by that filthy project, inspired and emboldened climate activists across the country. The Trump White House can boast and bluster all it wants, and corporate behemoths can scheme to take advantage of the administration's fondness for fossil fuels, but they are no match for determined grassroots opposition movements fighting for environmental justice and an end to the degradation of our air, water and climate.”

Energy corporations gaining approval from the government to run pipelines through reservations and invading tribal lands to plunder their natural resources descends from a long history of environmental racism toward Indigenous peoples, both at Standing Rock and elsewhere. Right now, fossil fuel corporations are lobbying hard to take advantage of the pandemic to advance their interests, garnering at least $3 billion in COVID-related funding so far and winning a Trump executive order using the virus as an excuse to allow secret fast-tracking of drilling on public lands.

At the same time, wealthy interests and large corporations are pressuring the Trump administration to endanger the lives of workers by prematurely opening the country. They claim solidarity with Black Lives Matter yet routinely discriminate against Black and Brown people and pay millions of dollars to lobby for the disenfranchisement of those very communities.

Last week’s wins show transformative change is possible, and it comes from the ground up, through sustained pressure. Overcoming voter suppression and corporate political dominance, renewing our democratic institutions, and aggressively expanding civic participation is the path to truly beginning the work of undoing structural racism and enacting transformative climate and energy policies.

Right now, the fight centers around the urgent need for the Senate to ensure our elections are safe and adequately funded. The House-passed HEROES Act includes $3.6 billion to help states expand Vote by Mail and ensure safe in-person voting amid the pandemic. The Senate has not voted on the HEROES Act, but is expected to take up action on a COVID relief package as soon as the week of July 20.

On Thursday, July 2, the DI joined the Leadership Conference on Civil and Human Rights and 109 other partners and allies in sending a letter to the Senate calling for Senators support the election provisions of the HEROES Act. The letter calls for Senators to support not only the $3.6 billion in financial assistance to the states but also the policy provisions of the HEROES ACT, including expansion of prepaid postage Vote by Mail, early voting, online and same day voter registration, and voter education.

DI partner organizations stand united in demanding a fully funded safe, accessible, and equitable election in 2020, so that the American people can take their seat at the governing table. Please activate your members this week. Use this COVID-19 Voting Social Media Toolkit to amplify the call for the Senate to provide funding for safe and fair elections. For more talking points, background info, and sample action alerts on the links between climate and democracy, check out the environmental democracy toolkit and letter to Congress spearheaded by some of DI’s environmental partners:

“The dual crises of rapid climate change and the global spread of the coronavirus has made it more clear than ever that proactive measures are needed to ensure that every voice is heard. We do not, and should not, have to choose between public health and a functioning democracy. We must advance our democracy so that it is representative of and responsive to 21st-century issues and all the people that call this country home. This means bold, comprehensive, democratic action to create an inclusive system that’s responsive to all communities, no matter where they come from, how much money they have, and/or the color of their skin. Democracy means a government of, by, and for the people. All people.”

Every year, the REV UP Campaign coordinates NDVRW to increase the political power of people with disabilities by sharing resources and getting people registered to vote. This year, NDVRW is July 13-17. With an estimated 35 million people with disabilities eligible to vote in 2020, we encourage our coalition partners and allies to participate in NDVRW in order to raise the disability voice and civic participation across the country!

Due to the current COVID-19 pandemic, AAPD and participating organizations are focusing on supporting the disability vote through digital organizing throughout NDVRW!

Here’s how to get involved:

You can access the full suite of AAPD’s NDVRW materials, resources and tools here.

On Wednesday, July 10, we were excited to welcome Senior Communications Associate Jeralyn Cave and Senior Staff Attorney Jennifer Lai-Peterson of DI partner Advancement Project to share findings from their recently released Vote by Mail (VBM) Messaging Guide and VBM Essay: Voting by Mail in 2020: Panacea or Predicament?. The guide, which focuses on the intersection of race and VBM, and provides recommendations and tools for organizers and advocates on how to counter vote-by-mail disinformation and provide insights on the potential impact of vote-by-mail on communities of color. These materials are critical to our efforts to center racial justice in our work to ensure all voters can safely cast their ballots and have them counted this November. Advancement Project also has made available their Making VBM Work for Communities of Color slides and VBM Social Media Research.

Jeralyn also shared the following information about the Vote by Mail advertisement testing referenced during the meeting:

The group Fellow Americans did message testing on the nation’s decline in social trust and vote-by-mail in the past two weeks. They found that young people, African Americans, and non-college educated voters were among those that had comparatively low social trust. By “Social Trust,” we mean belief that most people can be trusted. They tested videos.

On Monday, July 6, Massachusetts Governor Charlie Baker signed into law an $8 million voting reform bill that allows voters to vote by mail in the state’s primary and general election without requiring an excuse due to the COVID-19 pandemic. Other provisions include expanded early voting for both elections—a first for the state—and the establishment of safety protocols for election officials and voters. We acknowledge DI partners and allies ACLU Massachusetts, League of Women Voters, and Massachusetts PIRG for their work in strengthening this bill.

MONTANA
The “Ballot Interference Prevention Act” (BIPA) law passed by state lawmakers in 2017 prohibiting the collection and delivery of mail ballots was blocked Tuesday, July 7 by a Montana judge. Several Native American tribes and advocacy groups claimed that the restrictions on ballot collection uniquely and disproportionately impede Native American voters’ ability to participate in elections. In her ruling granting the preliminary injunction, the judge wrote that “The Court finds that BIPA serves no legitimate purpose; it fails to enhance the security of absentee voting; it does not make absentee voting easier or more effective; it does not reduce the cost of conducting elections and it does not increase voter turnout.”