EVERYONE SHOULD BE ABLE TO VOTE BY MAIL, ESPECIALLY IN A PANDEMIC 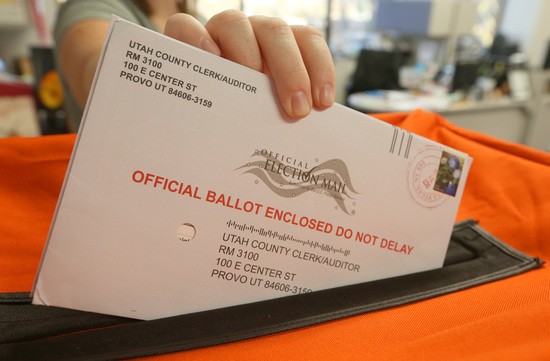 The COVID-19 crisis puts workers, immigrants, LGBTQ individuals, Black and Brown people, and the most vulnerable among us at great risk. They are on the front lines of the crisis. While DI partners and allies are working day and night to protect their respective communities, President Trump is openly pushing a divisive message and leading a deliberate strategy to suppress votes—especially Black, Brown, and vulnerable communities already suffering the most severe life and death consequences from COVID-19.

We saw the ugly results of this partisan political strategy play out in the Wisconsin primary where voters and poll workers literally risked their lives on election day after Republican legislators and courts blocked the Governor’s attempts to protect people by expanding vote by mail, extending absentee voting and delaying the election. 52 poll workers and voters tested positive for COVID-19 after participating in the primary.

All attempts by elected leaders and/or courts to block common-sense measures to secure safe access to voting or to confuse or mislead voters are an attack on our democracy. In this consequential election year, and with the potential for a constitutional crisis looming, the people must be able to participate and make their voices heard.

In Fall 2019, DI board and partners were prescient when they adopted a 2020 mobilizing and organizing plan to increase civic participation to 75% with an emphasis on Vote by Mail (VBM). With VBM, voters receive a ballot in the mail from their election officials, fill it out at home, then return it by either mailing it to their local elections office or drop it off in a designated location.

At the DI, we believe all voters should have the opportunity to vote by mail, especially now amid the COVID-19 pandemic crisis.

Vote by Mail increases participation and equity when paired with safe in person voting options
New analysis from the National Vote at Home Institute found that properly designed VBM systems increase voter turnout across race, age, income, and education, as well as among voters with disabilities. They also cite a recent study by the MIT Election Data and Science Lab that found very little demographic difference in the use of mailed-out ballots, by race, age, income and education, and that Black Americans appear to be slightly more supportive of mailed ballots than White Americans.

Importantly, the Vote At Home Institute report echoes other recent publications including a new report from DI anchor partner NAACP and the Center for American Progress (CAP) emphasizing the importance of maintaining safe in-person voting for individuals and communities who need that option. Expansion of vote by mail cuts down on crowded polling places, which in turn helps to keep in-person voters and election workers safe.

Both the NAACP-CAP report and a new report from DI anchor partner Demos lay out critical steps to safeguard the voting needs of historically disenfranchised communities—Black, Brown, and Native American people—and the most vulnerable among us—including the elderly, people with disabilities, and LGBTQ individuals. All voters have a fundamental right to cast a ballot and have it counted. In the context of COVID-19, this means voters should be able to:

State and Local Action Needed
The good news is that every state already practices some form of VBM such as absentee voting. In fact, 26% of all votes were cast by mail in 2018. In Colorado, Oregon, Washington and Utah elections, all voters are mailed ballots and have the option of returning them by mail with pre-paid postage or dropping them into local ballot boxes. But there is still much work to be done to ensure that all voters have the opportunity to cast their ballot by mail this year. 15 states still require voters requesting an absentee ballot to provide an excuse in order to get a mailed ballot. And, many states with no excuse absentee ballot programs will have to rapidly scale up their capacity to process a huge uptick in mailed ballots as more and more voters choose to vote from home.

Governors and local election officials have the responsibility to ensure that people don’t have to risk their health or their lives to have a voice in governing. The Brennan Center, a DI partner, has compiled and regularly updates an overview of how states are preparing for voting in the pandemic. The wecanvote.us site has voter-friendly up-to-date information on voting processes and deadlines in each state. For more information on how to get involved with state-level campaigns to push for safe, accessible and inclusive voting contact our national field manager, Getachew Kassa, gkassa@democracyinitiative.org.

Congress Must Provide Adequate Funds to Help States Ensure Safe Voting
While it is up to Governors and local election officials to make some changes to ensure that people don’t have to risk their health to have a voice in governing, those changes are costly - estimated between $2-4 billion nationwide. State and local governments already have their hands full and budgets maxed out dealing with the health and economic crisis. They should not have to shoulder the financial burden of safeguarding our elections. That is the federal government’s responsibility. So far, Congress has only appropriated $400 million, nowhere near enough.

Call to Action
Congress must step up and provide adequate funds to help states ensure all people have safe voting options this year. They are expected to act on a new COVID-19 emergency funding package in the coming weeks. It is critical this package contain adequate funding for states to virus-proof the 2020 elections. Use this COVID-19 Voting Social Media Toolkit to amplify the call for Congress to provide funding for safe and fair elections.

We want to lift up and celebrate actions and cross-sector solidarity by partners and allies in concert with the Democracy Initiative. If your organization is taking action on behalf of DI priorities, we’d love to hear about what you are doing so we can lift it up. After all, it is the creative ways DI partners take action that inspires our field organizing the most. Contact jflynn@democracyinitiative.org and let us know what you are up to.

Democracy Initiative-National Council of Asian Pacific Americans Anti-Racism Letter
Thank you to the following partners, allies, and affiliates who signed on to the joint NCAPA-DI letter standing in solidarity with Asian and Pacific Americans against the rise of racism and xenophobia related to the COVID-19 pandemic:

Earth Day Social Media
Special thanks to Friends of the Earth and NRDC for sharing our recent column on the connection between COVID-19, Climate, and Democracy, and 350.org, Clean Water Action, Greenpeace USA, Oil Change International for amplifying it. And special thanks to Folabi Olagbaju, Democracy Director at Greenpeace USA whose recent blog post inspired our column.

Save the Post Office Action
As our partners at the American Postal Workers Union and National Association of Letter Carriers continue the fight to save our Postal Service from the administration’s threats and from privatization, we thank our partners and allies at American Pacific American Labor Alliance (AFL-CIO), Common Cause, and Free Speech for People for sharing with us the actions their organizations have taken in support of the USPS. 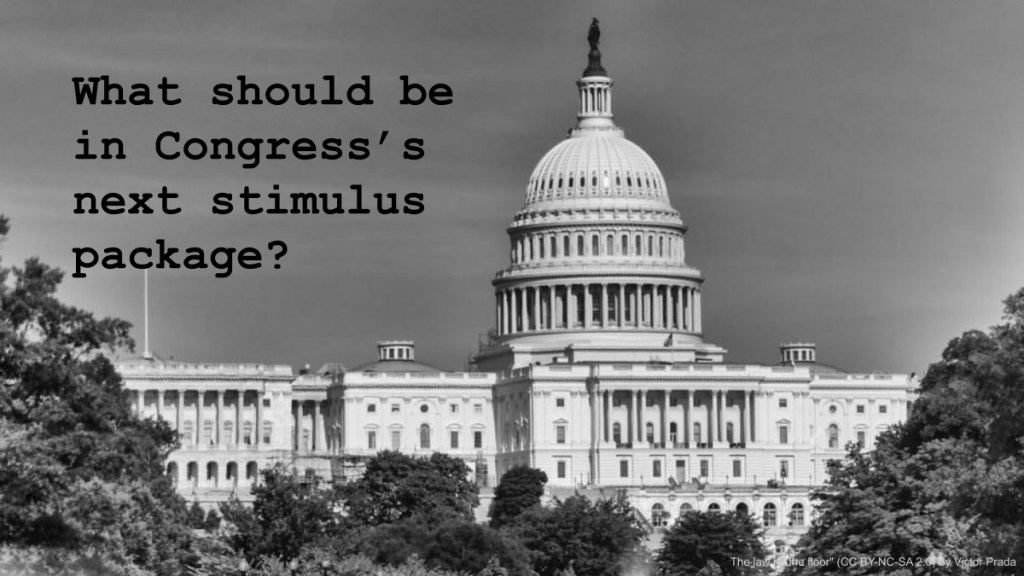 In an excellent piece from Take On Wall Street, Advocacy Coordinator Mandla Deskins lays out the minimum requirements for Congress’ next stimulus package.

“Our nation is facing an unprecedented crisis with wide ranging consequences. It is imperative that Congress take the lead as we work through this crisis, putting the needs of the most acutely affected populations—white, Black, and brown working people—at the forefront of all further relief efforts.”

We were especially excited to see them call for prohibiting any company that receives COVID-related federal support from all federal lobbying and campaign contributions for the duration of the national emergency. Previous COVID-19 relief packages, including the $2 trillion CARES 2 bill, feature no such limitation.

VICTORIES IN THE FIELD

NORTH DAKOTA TRIBES REACH SETTLEMENT OVER VOTER ID LAW
Weeks before the 2018 midterm elections, the Supreme Court of the United States refused to intervene in a case that went on to disenfranchise thousands of Native Americans. The decision handed down by the Eighth Circuit Court of Appeals required ID used to vote to have a street address, which many Native Americans on reservations lack. The decision disenfranchised roughly 17,000 Native American voters who both lacked an address and sufficient documentation to qualify otherwise.

On Friday April 24, the Spirit Lake Nation and Standing Rock Sioux Tribe, represented by DI allies Campaign Legal Center, reached a settlement with the state of North Dakota to provide a way for Native American voters without street addresses to vote. Under the new settlement, Native American voters who do not know or do not have a street address can locate it on a map at the polls. Those applying for a mail ballot will be given their street address by election officials.

CO AND VA BECOME LATEST STATES TO END PRISON GERRYMANDERING
On April 22, Virginia became the ninth state to end prison gerrymandering, which is the practice of counting incarcerated Americans as residents of the district in which they’re imprisoned, not where they live. Virginia joined Colorado, which recently became the eighth state to ban prison gerrymandering on March 23, in ending the practice. Prison gerrymandering saps political representation from higher populated urban areas and instead favors the often-rural districts that have prisons. Under these new reforms, both states have taken important steps in ensuring fair maps, representation, and federal funding for their residents.