Our highlighted issues and actions from the democracy movement—please share widely.

HR1 PASSES HOUSE, SENATE MUST NOT ALLOW FILIBUSTER TO KILL IT 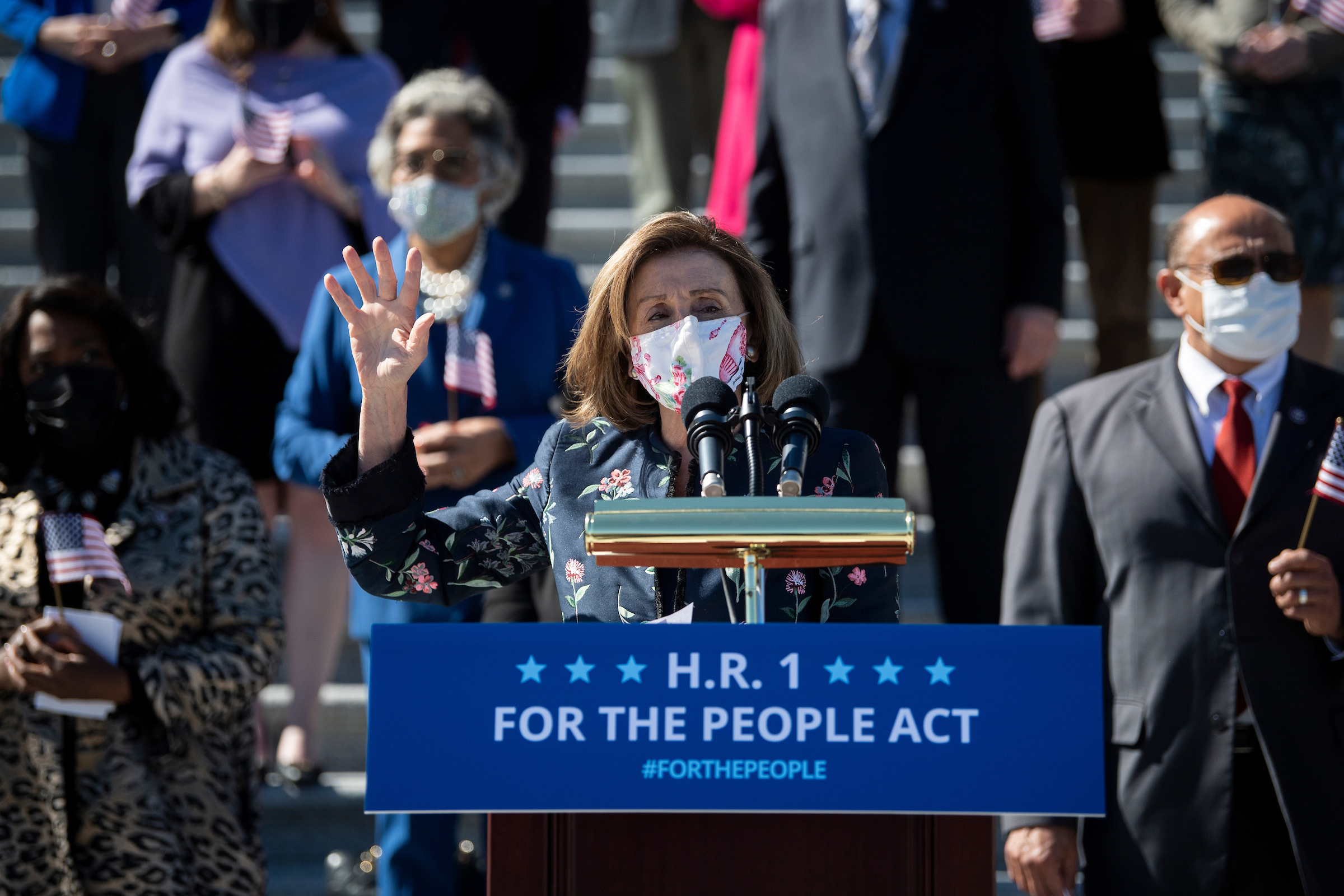 On March 3, the US House of Representatives passed the For the People Act, a sweeping package of democracy reforms that brings us one critical step closer to repairing our political system, revitalizing our democracy, and fulfilling the promise of our country’s ideals. The House’s passage of HR 1 is the hard work of three years of mobilization and organizing done by grassroots activists and advocates across the country.

The fight now moves to the Senate. A hearing before the Senate Committee on Rules and Administration is scheduled for March 24, 2021. But so long as Minority Leader Mitch McConnell can weaponize Jim Crow tools like the filibuster against the full enfranchisement of all eligible Americans in our democratic process, S1 is likely to face the same fate as it did in 2019. As Sen. Merkley recently said at our February 24 Principals Convening, Senators need to hear from the grassroots that McConnell’s deployment of the filibuster is not an excuse; you can save the filibuster, or democracy—you can’t save both.

After the House’s passage of the For the People Act, DI Interim Executive Director Jennifer Lamson said:

We applaud House for moving swiftly and passing the For the People Act (HR 1)—a transformative and crucial step toward realizing the promise of American democracy. All eyes now turn to the Senate. It is critical that Senators move with urgency to prioritize passage of this vital legislation. It is unacceptable to allow backroom maneuvers like the filibuster to stand in the way.

DI distributed a set of talking points for the passage of HR 1 that reflects expertise and messaging guidance from DI partners Greenpeace and Demos and allied coalition Declaration for American Democracy; please feel free to continue lifting up this tremendous win for democracy as we look to continue the fight in the Senate.

We are still collecting DI partner and ally statements on this historic victory; if you do not see your organization’s statement here, email Jack Flynn at jflynn@democracyinitative.org to make sure it’s included. You can access the statements here.

As DI has said since its founding in 2012, it is completely unacceptable that a minority of elected officials representing a minority of the country can completely block legislation demanded by the majority, many of which would drastically improve the lives of our country’s most marginalized communities. So long as the filibuster remains on the table, however, essential legislation such as the For the People Act, John Lewis Voting Rights Advancement Act, DC Statehood, the PRO Act, and more will be condemned to McConnell’s legislative graveyard.

DI partner Demos, Just Democracy, and Truth & Conciliation released an incredible new report last week, entitled “End the Filibuster: How a Relic of Jim Crow Could Block Our Progressive Agenda,” that tackles the filibuster’s use throughout history as a tool of white supremacy and explains how, unless we get rid of it, the filibuster will continue to thwart progress on the issues our communities care most about.

AFL-CIO LEADERSHIP AND ACTION ON FILIBUSTER REFORM
The Protecting the Right to Organize Act (PRO Act), the most significant pro-worker legislation in decades, passed the House Tuesday, March 9. When brought before the Senate in 2020, McConnell used the threat of a filibuster to prevent it from ever reaching the floor. As DI anchor partner AFL-CIO's Executive Council, including DI board member and AFL-CIO Executive Vice President Tefere Gebre, said in a statement released Thursday, March 11:

“At stake is the urgent work of investing in our country, defending our democracy against those who would take the right to vote away from working people and, most of all—righting the balance of power in our country through the Protecting the Right to Organize (PRO) Act—addressing decades of runaway inequality of wealth, income, opportunity and power that have left working people impoverished, silenced and angry.

And standing in its way is an archaic Senate procedure that allows the minority to block the majority—the filibuster. An artifact of Jim Crow. A creature of white supremacy. A procedure that was said to encourage robust debate but has turned into an instrument of government paralysis. A tool used by those seeking to preserve the social, economic and political status quo, that the AFL-CIO has long opposed, as a matter of principle as undemocratic and rooted in racism.

The AFL-CIO calls on the Senate to work with the president and the House to enact a Workers First Agenda—investment, democracy, freedom and dignity in the workplace and justice in our economy.

But if that proves to be impossible under the Senate’s current rules—we call for swift and necessary changes to those rules so that the will of the people of the United States expressed in the 2020 elections can be turned into the progress our country and our people desperately need.”

FRIENDS OF THE EARTH LEADERSHIP AND ACTION ON FILIBUSTER REFORM
The filibuster is also consistently used to block urgent environmental legislation. Thanks to the leadership of DI board member and Friends of the Earth President Erich Pica, over 70 climate justice and environmental groups signed on to a letter addressed to Senate Majority Leader Chuck Schumer that calls for the elimination of the Senate filibuster. The letter, which included signatures from DI partners 350.org, Food & Water Watch, Friends of the Earth, Greenpeace, Oil Change U.S. and Public Citizen, reads:

“On behalf of the climate justice movement, communities on the frontlines of climate change, and our allied partners, we look to you to lead the rehabilitation of our institutions. That work must begin with abolishing the filibuster. Action on the climate crisis in a way that centers environmental justice should not be obstructed by a minority of Senators representing a minority of the country. Neither should progress be blocked by an even smaller minority of fossil fuel executives who have profited off of selecting as, and rendering disadvantaged communities into, sacrifice zones.

The climate crisis is already a daily reality for millions who reside in the United States—one that disproportionately impacts environmental justice communities, who are subjected to heatwaves, wildfires, rising seas, and increased threats to public health. They cannot afford to wait on a supermajority in the Senate. The bold climate agenda we need is incompatible with a regular order that subjects it to interdiction by an obstructive Senate minority.”

TAKE ACTION: Friends of the Earth created a social media toolkit for amplifying this critical letter; please continue to amplify this powerful letter on social media and in your networks.

We cannot expect meaningful progress on voting rights, workers’ rights, racial justice, the environment, immigration, healthcare, fair representation, or any other issue so long as a handful of Senators use the filibuster to protect the interests of the wealthy and powerful at the expense of the American people.

DI PRINCIPALS CONVENING: LAUNCHING THE 2021 DI SENATE RULES REFORM CAMPAIGN
On February 24, more than 60 partners and allies representing more than 35 organizations, including over 20 principal leaders, convened for a critical discussion on what it really takes to ensure the Senate uses the governing mandate it received from voters to strengthen our democracy and govern on the host of issues we all care about. We heard from our powerful guest speakers Sen. Jeff Merkley and New Georgia Project CEO Nsé Ufot on the current challenges posed by the Senate filibuster and how to deliver real change for our communities, as well as several DI leaders on their organizational commitment to ensure a functioning Senate.

Tefere Gebre, AFL-CIO: "We’re here to conspire not just about how to win elections but about how we collectively advance our agenda through a Senate operating the way it has. The rules changes that allowed hundreds of stymied Obama appointments to go through in 2013 would not have happened without this multiracial, cross-sector set of constituencies tenaciously mobilizing the field. That’s what it’s going to take for us in 2021."

Larry Cohen, Our Revolution: "What we want to be thinking about is how are we going to mobilize our members, particularly in Arizona and West Virginia? When Senators go back to their home state, they need to hear about not just the filibuster but also governing with a majority."

Gustavo Torres, CASA: "Fixing the Senate is going to impact our communities and our families. CASA is totally ready to organize and mobilize our members so that the filibuster does not stand in the way of meeting this moment and finally passing comprehensive immigration reform.”

Erich Pica, Friends of the Earth: "Friends of the Earth is behind Senate rules and filibuster reform, and we’re working with the rest of the environmental movement to do so. From the climate and energy perspective, we can’t wait. Every day we wait, every year we wait, the crisis gets worse, and we’re running out of time. Delay on Senate Rules reform is delay on our capacity to make a healthier planet. I’d also like to point out that any more delay on democracy reform means that it’s a decade—if we don’t get something done this year, we’re waiting ten years to get something done. Delay is no longer acceptable.”

Virginia Kase, LWV: “Back in 2011, the League supported Senate Rules changes. We recognize the importance of our ability to function as a government. Some of the concerns and questions we have are specifically around the unprecedented use of filibuster and holds. We all recognize transparency and accountability really need to be non-negotiable. We are ready to go all in and throw down on this fight.”

TAKE ACTION: As the fight over Senate rules ramps up, DI will be sharing actions your organization and membership can take to ensure that Senators know the days of Mitch McConnell’s obstruction are over. To learn more about how your organization can get involved, email Getachew Kassa at gkassa@democracyinitiative.org.

The 2020 election and January 6, 2021 shined a spotlight on critical vulnerabilities in our democracy. Since then, 43 states have already introduced, prefiled, or carried more than 250 bills to restrict or limit voting access this year. intentionally aiming to drown out the voices of voters, particularly Black and Brown voters, who voted in record numbers this past election cycle. Your members’ engagement in these fights to protect and expand upon the voting rights victories won over the past several years could prove to be decisive.

Below are some urgent actions for which state advocates requested support. We encourage you to activate your members in those states to take action for voting rights. If you have any questions, please direct them to Izzy Bronstein at IBronstein@commoncause.org.