KAVANAUGH APPOINTMENT: A MISCARRIAGE OF JUSTICE

Make no mistake: Saturday’s decision by Senators Collins, Manchin, and 49 of their colleagues to support Brett Kavanaugh’s confirmation to the Supreme Court is a miscarriage of justice and fairness. Brett Kavanaugh’s behavior as a person, a judge, and a nominee would be unacceptable were it not for his race and class position. But 51 bad choices today will not diminish decades of hard work to make our voices heard and our issues matter. We will not let this moment tear us down; instead we will use it to build a bigger platform—for good jobs, fair pay, and basic benefits like paid sick time to care for ourselves and our families. We will double down on exercising our right to vote and our demand for a government that works for us and not special interests. Because the more women are a force to be reckoned with, the likelier we are to keep a travesty like today’s from happening again. 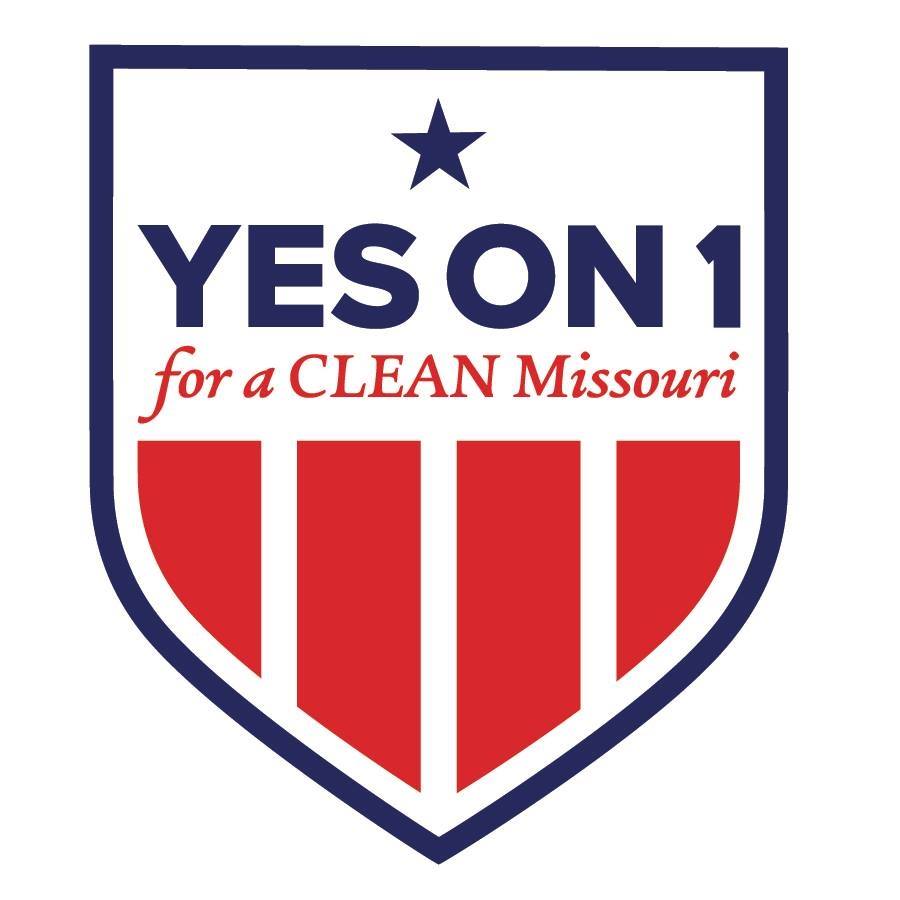 You can make a difference in the Missouri campaign right now: The Missouri campaign’s greatest needs at the moment are for organizations to send out awareness and fundraising emails to their Missouri lists, to raise awareness and educate their members on Amendment 1. Clean Missouri has prepared sample emails and a general partner toolkit to facilitate your engagement. Additionally, the campaign would appreciate organizations sharing their recent voter education video.

Here's a campaign snapshot to share with your members:
The “Clean Missouri” campaign is a diverse coalition of workers, students, seniors and their families who are fighting for good-paying jobs, and holding accountable the extremist politicians who insist on attacking workers instead of creating jobs. The coalition is fighting to ensure elected leaders help create the kind of good jobs that pay a fair wage and help give Missouri’s children the education they need to have a better life—not exploit their teachers, the workers rebuilding Missouri’s communities after natural disasters, nurses and firefighters—the people that make Missouri work every day.

The coalition’s Clean Missouri Amendment to the Missouri State Constitution tackles both redistricting and ethics reform. The amendment will enact the following, if voted into law: 1) change process and criteria for redrawing state legislative districts during reapportionment; 2) change limits on campaign contributions that candidates can accept in legislative races from individuals or groups; 3) establish a $5 limit that state legislators, and their employees, can accept from paid lobbyists; 4) require politicians to wait two years before becoming lobbyists; 5) prohibit political fundraising by candidates for members of the state legislature on State property; and 6) require legislative records and proceedings to be open to the public.

The majority of opposition to the amendment comes from elected leaders through earned media. This campaign is poised for success based on its collaboration with other campaigns in the state and their ties to the winning coalition that defeated Missouri’s anti-union “Right to Work” law in August.

HAVE YOU SIGNED THE VOTING RIGHTS PETITION YET? 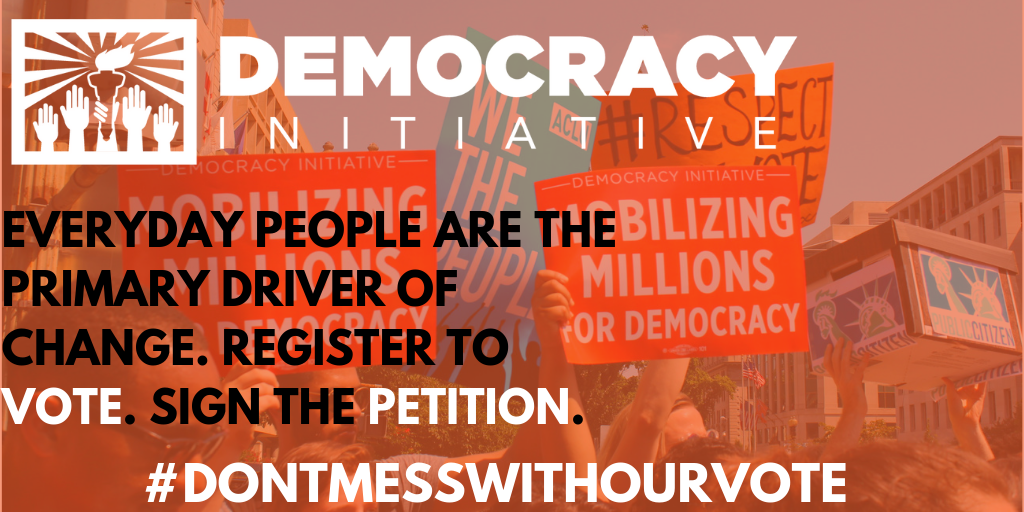 Our thanks to AFL-CIO, MoveOn.org, Corporate Accountability International, AAI, Center for Environmental Health, Common Cause, Sierra Club, CWA, and ReThink Media for sharing the petition and their commitment to voting rights.
The Kavanaugh nomination battle has illustrated this truth clearer than any metaphor: elections have consequences. Now more than ever, voting rights are under threat. Kavanaugh’s hostility to voting rights is well documented, and his unstable temperament and blatant disregard for the facts was on display during his hearing. Organizing around the defense of our voting rights is now a fundamental objective in the fight to protect and expand our democracy. As the indomitable Shirley Chisholm once said: Defeat should not be the source of discouragement, but a stimulus to keep plotting.
We need you, and your members, to commit your signatures. We’ve extended our deadline to October 15 before delivering signatures to your elected officials. Why? Because we’ll never win on our own issues if we can’t win on this issue. Sign the petition and send a message to Kavanaugh, the senators who installed him, and the wealthy interests that spent over $7 million on his nomination: #DONTMESSWITHOURVOTE.

NEWS FROM OUR PARTNERS

NAACP PARTNERS WITH WEtv IN MULTI-PLATFORM EFFORT TO GET OUT THE VOTE
NEW YORK, NY, October 4, 2018—WEtv, the #1 cable network for African-American viewers on Thursday nights, announced the launch of a new campaign produced in partnership with the NAACP that encourages its viewers to make their voices heard by voting on November 6. The non-partisan effort features WEtv talent delivering the “get out the vote” message that underscores the importance of participating in the democratic process and emphasizes that together with the NAACP, we make a difference.

Viewers are directed to NAACP.Org/Vote for more information. In addition to WEtv platforms, the NAACP will also distribute the campaign via its Twitter, Instagramand Facebook accounts, and naacp.org/vote will serve as a hub for resources and information regarding voting.

COMMON CAUSE EDUCATION FUND REPORT ON ELECTION SECURITY
Today, DI partners and allies Common Cause Education Fund (CCEF), the National Election Defense Coalition, R St, ACM, and the US Technology Policy Committee released a report outlining the serious and unaddressed threat to the integrity of the nation’s elections and democracy posed by the continued use of online voting in 32 states. The report highlights that at the very least 100,000 ballots were reported to have been cast online in the 2016 general election. The report, “Email and Internet Voting: The Overlooked Threat to Election Security,” will be released during a press teleconference at 11:30am EDT.

The report examines the threats faced by various forms of online voting including blockchain internet voting, which is being used in West Virginia this election cycle. Due to the extensive vulnerabilities, the report emphasizes that online voting must be discontinued completely by 2020, and recommends short-term best practices for voters and elections officials in the 2018 election. Experts in the private sector, government and military have studied the feasibility of internet-based voting for years and concluded that it isn’t secure and should be curtailed.

You can access the report on the micro-site the CCEF staff created at http://internetvotingthreat.org. If you have any questions about CCEF’s election security program, you can contact Susannah Goodman, CCEF Director of Election Security and coauthor of this report at sgoodman@commoncause.org.

We've extended our nomination deadline to October 15! We have some great nominees; many of you do great work in the progressive movement. Lift up your leaders and your organizations who've made the difference! We want you to hear from you!
Please use this link to nominate an organization or an individual for a Democracy Champion Leadership Award. Include a few sentences in support of your nominee. If you have any questions, please contact Elsie Guerrero at 202-567-6101, or eguerrero@democracyinitiative.org 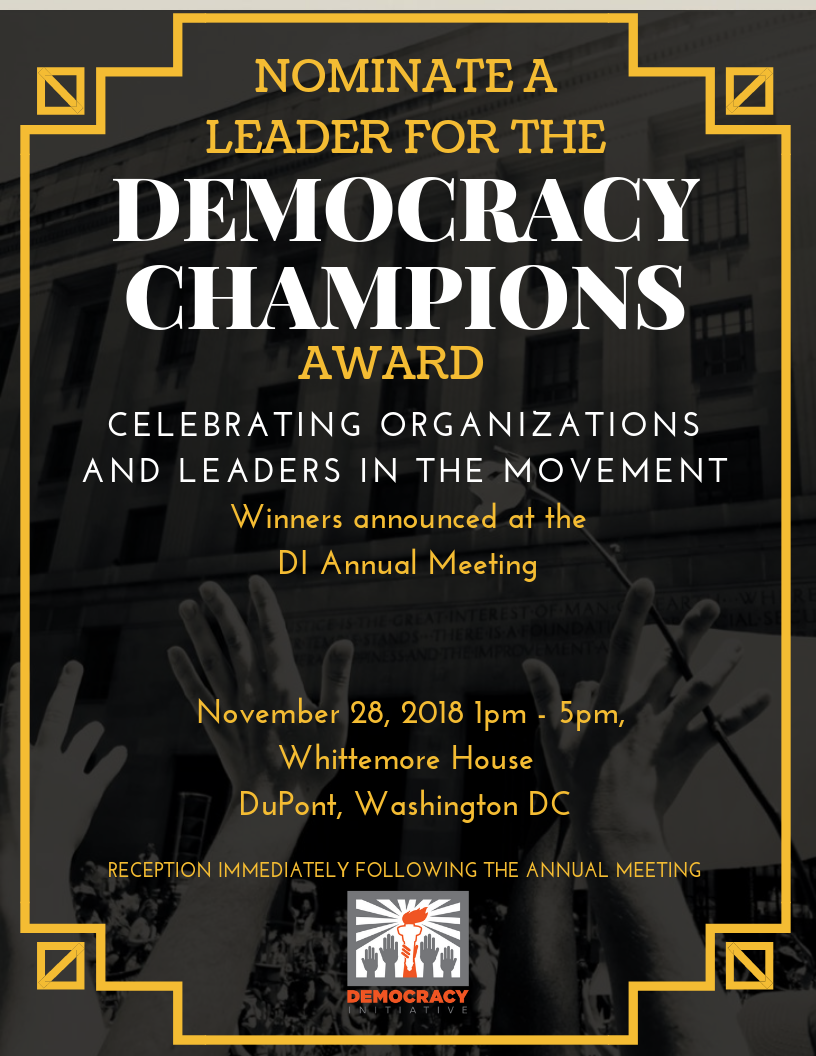 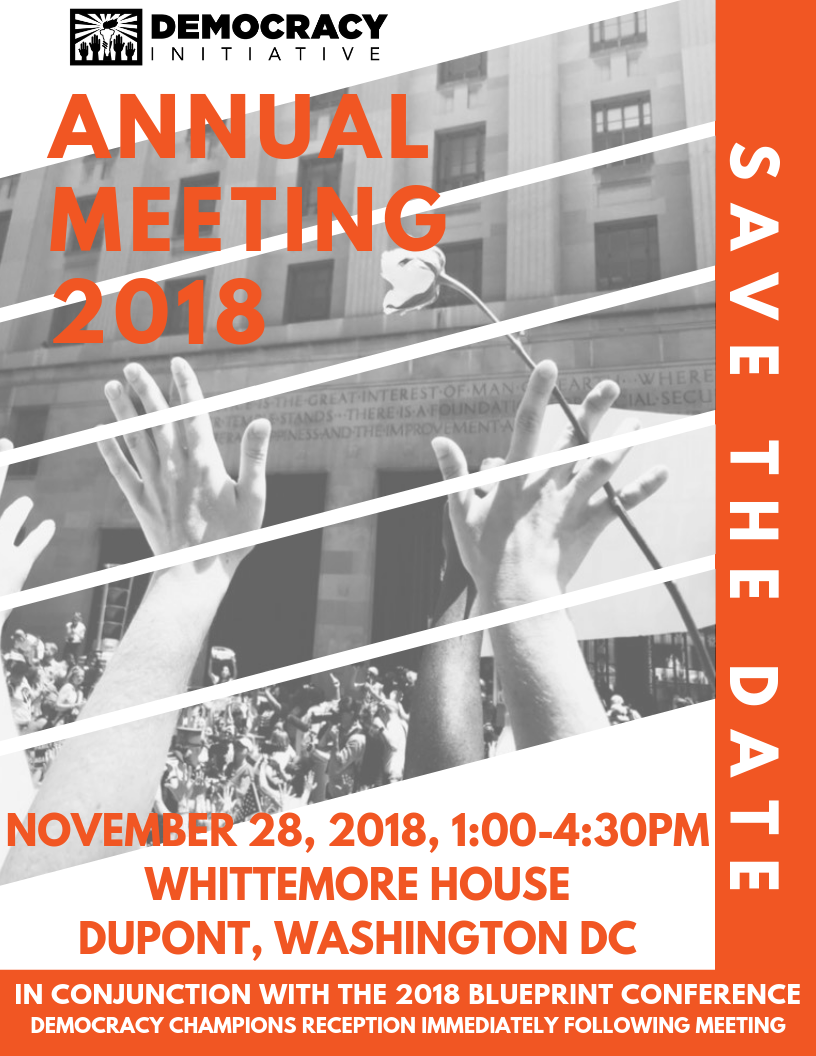 There is growing momentum to clean up Missouri politics. In September, Missourians overwhelmingly voted to defeat an anti-union 'Right to Work" law. In a couple weeks, Missouri voters will head to the polls to decide the fate of the Clean Missouri initiative.

Join us on Wednesday, October 17th at 3pm EST to hear from Clean Missouri campaign manager Sean Nicholson about the initiative, the collaborative work with labor, environmental, civil rights, and faith groups, and how your organization help in the final stretch of the campaign.

For more information and to RSVP, contact Getachew Kassa at gkassa@democracyinitiative.org.

The communications working group is our collaborative space for message refinement and development for our current field work. We need your skills. These monthly meetings also help to resource partner organizations for ongoing local and national campaigns and coordinate messaging and communications as a coalition.