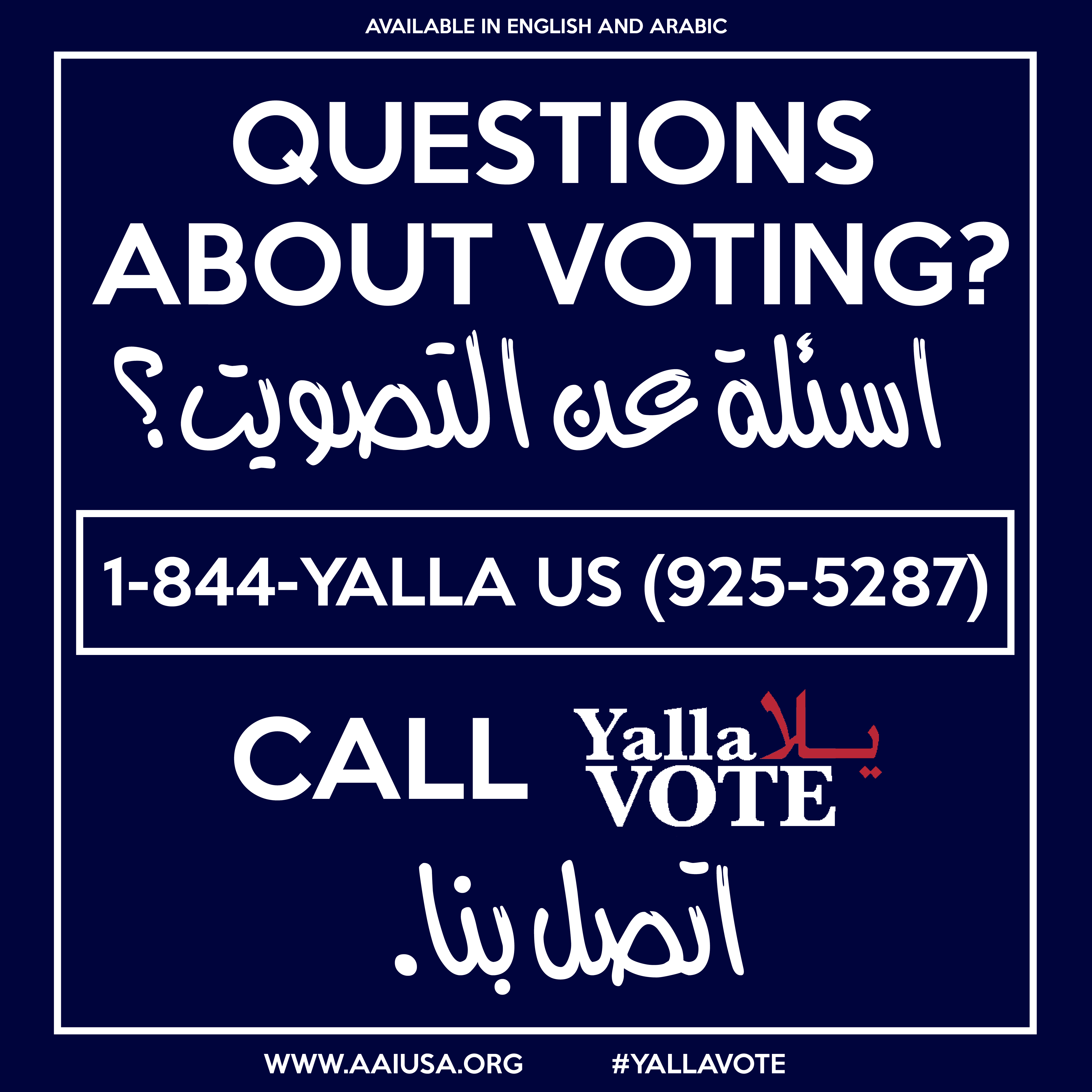 DI partner the Arab American Institute has launched the #YallaVote Hotline for the 2018 election season.

The hotline is staffed by legal experts and both Arabic and English speakers who can answer questions and address concerns on voting day. These experts can also provide legal support to address voter suppression or disenfranchisement in your state.

Please spread information about the hotline widely, so that all voters are given the information and support needed to exercise their constitutional right to vote. The #YallaVote Hotline can be reached at 1-844-YALLA-US, or 1-844-925-5287. 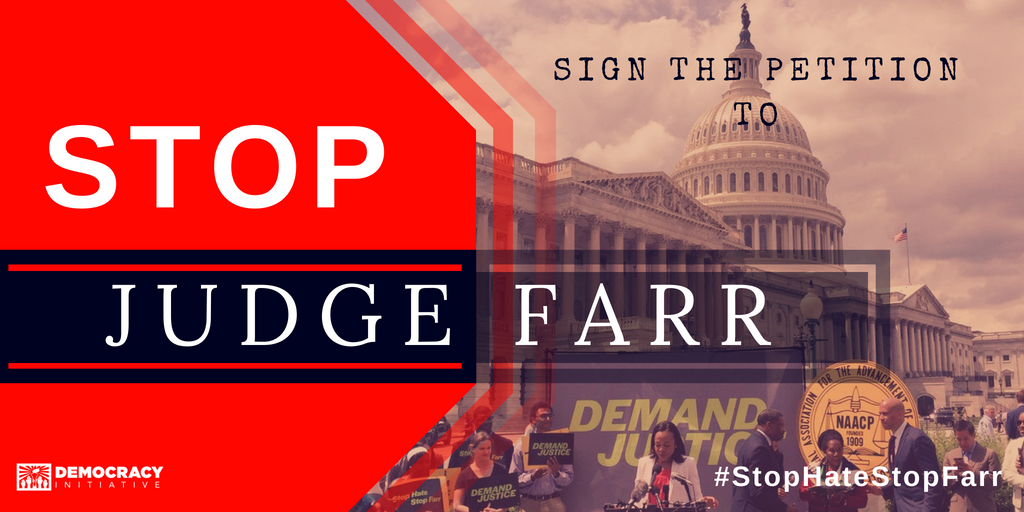 On Wednesday, June 6, Civil Rights Leaders, Senators, Members of Congress, the NAACP, Demand Justice, Repairers of the Breach, and the Lawyers’ Committee for Civil Rights under Law, held a joint press conference and rally outside the U.S. Capitol to urge opposition to the Trump administration’s nomination of Thomas Farr as a Federal district judge. President and Director-Counsel of NAACP Legal Defense Fund Sherrilyn Ifill stated:

“That Farr would now be made a federal judge is offensive. It is offensive to African Americans in the Eastern District and all people who depend on independent and impartial courts. His legal career has been dedicated to opposing the rights of workers and denying African Americans full participation in our democracy. His record is repugnant and provides ample grounds to oppose his confirmation.”

Color of Change has created a petition to the Senate Judiciary Committee to oppose Farr’s nomination, which DI Partner NAACP has endorsed.

Sign the petition to block his nomination here. #FarrOut 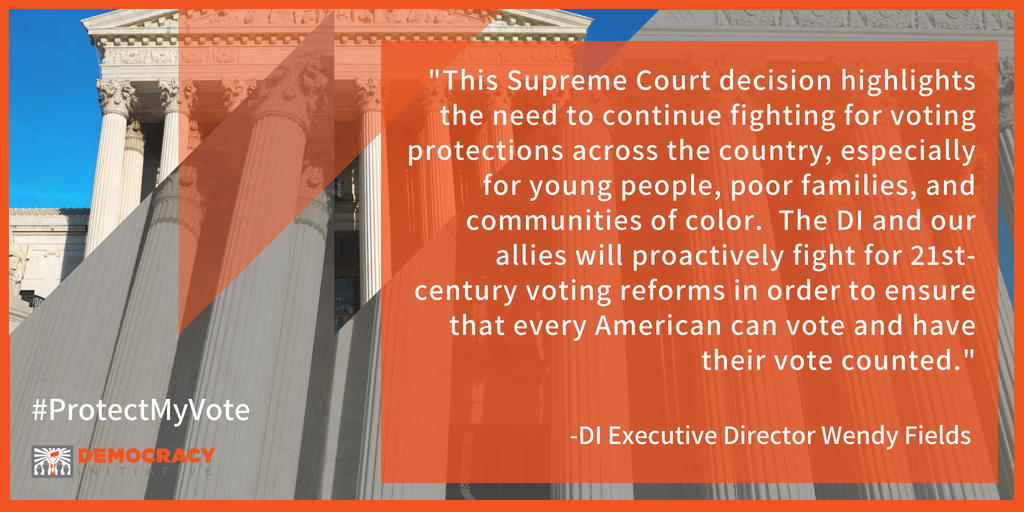 On Monday, the Supreme Court ruled in a 5-4 decision on behalf of Ohio, allowing its aggressive voting "purge" to continue. In Ohio, voters who abstain from voting or simply do not vote in a federal election are sent a mailed notice asking them to confirm their residence. If they fail to reply and do not vote for four more years, they are then purged from the Ohio voter rolls. People should have the right to be able to vote whenever they want, even if they have not voted in the past or have missed a few elections. In a country where voter turnout is already low, these kinds of practices simply make it more difficult for those who do want to participate in our democracy.

Read more about the Supreme Court's disappointing decision to allow for the continued purging of Ohio voters here. 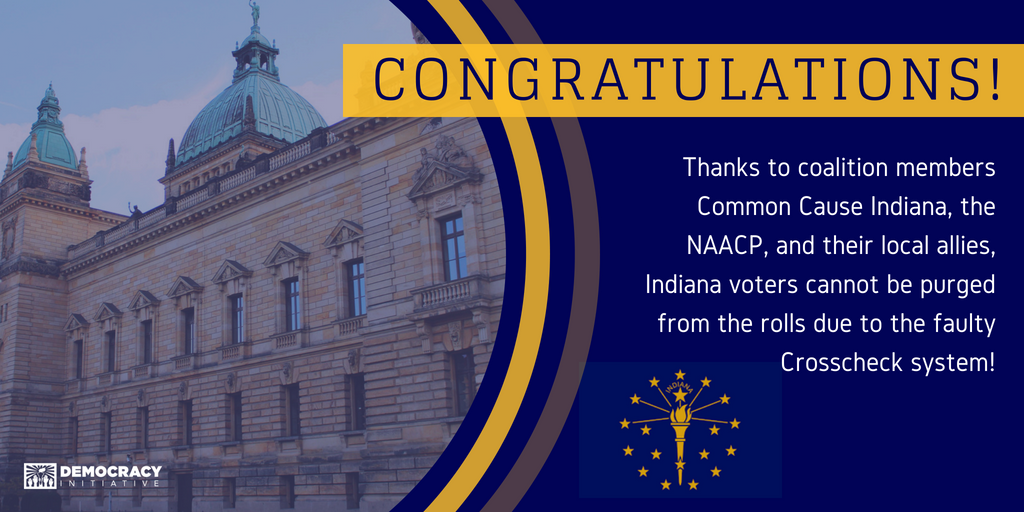 Congratulations to DI partners and allies on their victory in Indiana for voting rights. Common Cause Indiana, represented by the ACLU and DI partner Demos, secured an injunction on Friday, June 8 against use of the Interstate Voter Registration Crosscheck Program.

"The court agrees with Common Cause that the greater public interest is in allowing eligible voters to exercise their right to vote without being disenfranchised without notice,"

Pratt wrote in her 28-page ruling.

The Crosscheck program, championed by Kris Kobach, has demonstrated “inaccuracy and […] significant security holes” according to Demos Senior Counsel Stuart Naifeh. The injunction in Indiana secured by our partners and allies shows that we won’t allow our voting rights to be stripped away. Every reform and ruling we achieve brings us one step closer to a representative democracy for all.

Read more about the tireless efforts of coalition members Common Cause Indiana and the NAACP, as well as the problems posed by the Crosscheck system instituted by Kris Kobach, here.

With only 5 months left until the election, our allies supporting Second Chances Florida need our help to boost their calling program. To do that, they’re asking partners to pick a day every month for remote calling to Florida voters. You can sign up for a calling day here. Contact Jonah Minkoff-Zern at jzern@citizen.org for more ways to help; follow and amplify the campaign on Facebook and Twitter. 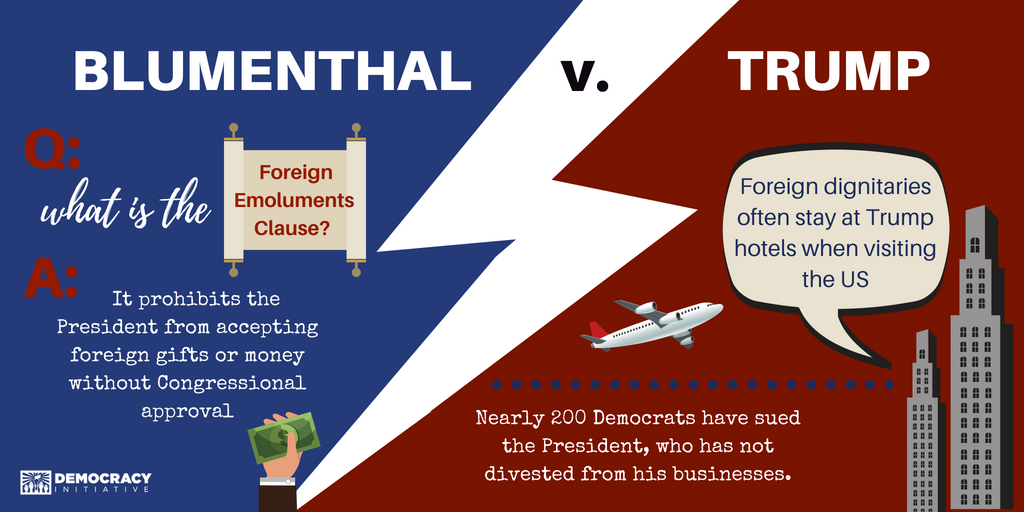 Senator Richard Blumenthal (D-CT) has been joined by nearly 200 Democrats in a lawsuit against President Trump. Click the image or here to read more. 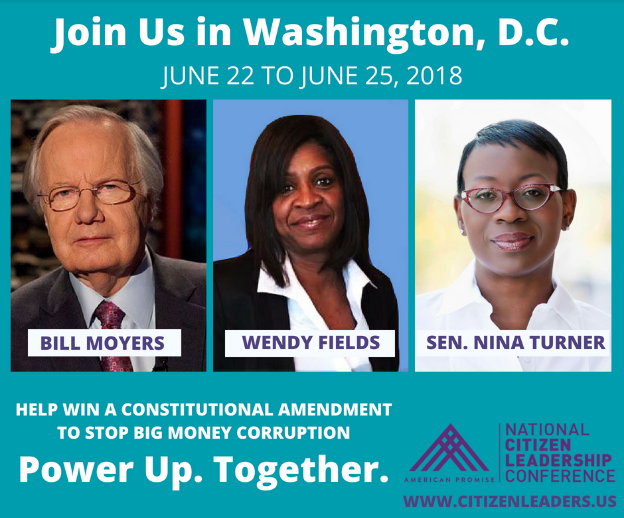 DI Executive Director Wendy Fields will be on the panel "Working Together: Effective Collaboration Between Groups" on 11 a.m. on Sunday, June 24th, at the American Promise National Leadership Conference. For more information and to register for the conference, which runs June 22 through June 25th, click here. 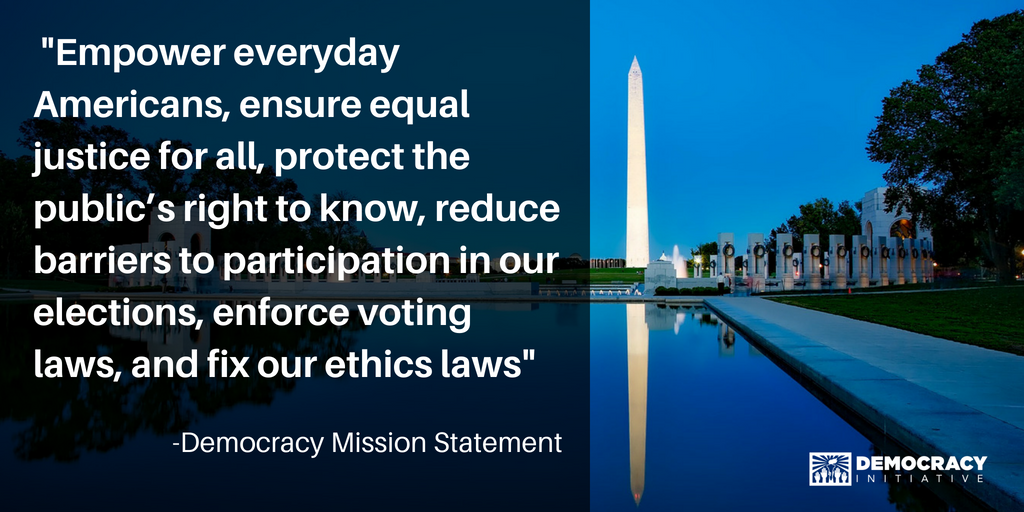 While the focus of Democracy Initiative remains on the field, supporting local and state campaigns, we also see the value of and need for reform on the federal level. We’ve joined in coalition with a variety of groups to gain broad agreement on a set of democracy principles for Congress. Click here to read the full "Democracy Mission Statement" that we've signed. If your organization has not yet endorsed the statement, please contact Myke Bybee at the DI to get involved, at mbybee@democracyinitiative.org.

SAVE THE DATE: MEET THE AUTHOR OF “DEMOCRACY IN CHAINS” 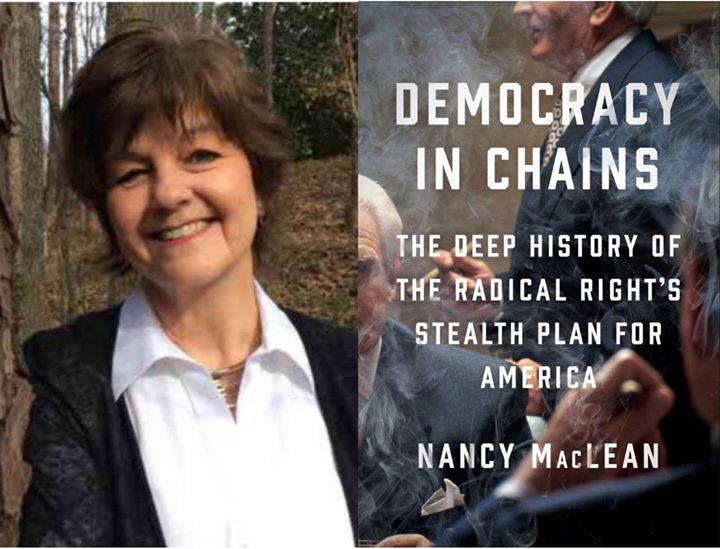 Center for Popular Democracy, Common Cause, Democracy Initiative, Equal Voice, and Working Families are excited to sponsor a reception on Monday, June 18th, with Professor Nancy MacLean, author of “Democracy in Chains: The Deep History of the Radical Right’s Stealth Plan for America.”

For additional details, and to RSVP: here.
The book discusses the strategic and historic underpinnings of the right-wing billionaire assault on our democracy. It is the winner of the Los Angeles Times Book Prize, was a finalist for the National Book Award, and was listed as The Nation’s Most Valuable Book. Ms. MacLean is a professor of history and public policy at Duke University.

SAVE THE DATE: MICHIGAN DEMOCRACY CHAMPIONS TRAINING IN FLINT - JUNE 23, 2018

Join fellow activists to learn hard-hitting communications and smart strategies. Dig into the connections between the fight for democracy and today’s most pressing social issues—from environmental justice to the fight against racism and hate, from workers’ rights to issues within the LGBTQ community. We invite the Democracy Initiative’s 69 partner organizations to extend an invitation to all of your staff, members, and activists to participate. This is an opportunity for your members and activists in Michigan to become Democracy Champions, motivated and empowered to carry forward the pro-democracy fight in their communities. 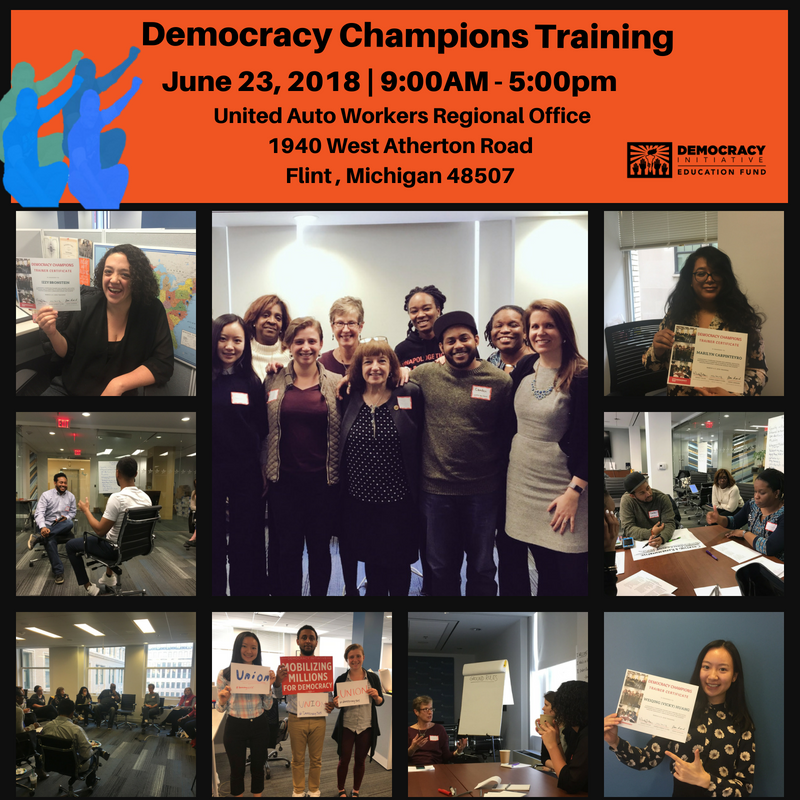 This highly-interactive training, grounded in popular education principles, will make the connections between democracy, power, and the ability to win justice on the diverse issues that motivate our partners. Participants will learn about effective communication and have an opportunity to practice making the pro-democracy case. We ask that our partners send 2-3 participants to the training. At the conclusion of the training, every participant will be recognized and celebrated as a Democracy Champion, with opportunities for ongoing engagement.  Contact Getachew Kassa with any questions at gkassa@democracyinitiative.org

We are maintaining a DI campaign calendar that will include information on upcoming events and activities. Visit our website to access the calendar. Contact Elana (eorbuch@democracyinitiative.org) if you have questions.

Beginning next week, on June 13th, DI’s bi-weekly Mobilizing Committee Meetings (at 3 p.m. every other Wednesday), will shift their focus to state coordination of priority campaigns, beginning with the Promote the Vote and Voters not Politicians ballot initiatives in Michigan. For more information, contact Getachew Kassa at gkassa@democracyinitiative.org

Fourth Wednesday of every month, at 1pm E.T. Note new day!
The communications working group is a collaborative space for message refinement using feedback from organizations working on the ground. These monthly meetings also help to resource partner organizations for ongoing local and national campaigns and coordinate messaging and communications as a coalition.
RSVP to apohl@democracyinitiative.org