VIRGINIA—KEY VOTING REFORMS NEARING FINAL VOTESOver the last month and a half, the opening session of Virginia’s state legislature has seen a flurry of democracy reforms moving through the legislative process, but there is still work to be done to ensure they get signed into law. With the session ending on March 7 and the process moving quickly, we’re tracking a suite of important voting rights reforms that will significantly contribute to achieving the goal of 75% voter participation DI partners established at our annual meeting. Over the next week or so, House-Senate conference committees will meet and prepare final versions of key voting rights bills for the final-passage votes. We’ll be encouraging our partners to make use of our toolkit to help these bills get over the finish line.

DI partner ReThink Media has worked with us to develop a social media toolkit for organizations with Virginia membership to demonstrate their members’ support for democracy reform in Virginia. Stay tuned for further updates from the DI and please ask your social media manager to get in touch with Jack Flynn at jflynn@democracyinitiative.org so we can be sure to coordinate.

Below is an update on key reform priorities:

MARYLAND—SHOW YOUR SUPPORT FOR PREPAID POSTAGE FOR MAIL BALLOTSThe Maryland General Assembly is currently considering SB 33/HB 881, a bill that requires all mailed absentee ballots provided to voters to come with prepaid postage and instructions for their return. We ask our partner organizations with Maryland members to encourage them to voice their support for this crucial reform heard.

Your Maryland members can take action in two ways:

Maryland has long accommodated those who could not vote on Election Day with absentee ballots that can be mailed back with their vote. Absentee ballots are essential in making sure that the voice of those who cannot vote in person will still be heard. The process for using absentee ballots should be as seamless as possible so that voters can participate in the franchise with ease. That's why we support prepaid postage on all mail ballots.

MICHIGAN—NEW VOTING RIGHTS GUIDE & RESOURCES AVAILABLEWith three weeks until the first statewide election with the state’s new voting rights, a new website, https://www.michiganvoting.org/, launched last week to educate voters on the changes to their voting laws after the 2018 elections. Site visitors can access Know Your Voting Rights Guides online, volunteer to become a poll worker, and learn more about registering to vote, request a no-excuse absentee ballot and vote before election day, and more.

Share this website widely with your Michigan members! We want all Michigan voters to take full advantage of the new voting laws that expand access and remove barriers to the ballot.

We are pleased to announce that we will host a special political briefing on the 2020 elections for DI partners on February 26 at 3:00pm EST, where Michael Podhorzer, Senior Advisor to the president at the AFL-CIO. Mike will share polling and political analysis about how the 2020 elections are shaping up for progressive issues and the democracy agenda. We look forward to seeing you there. 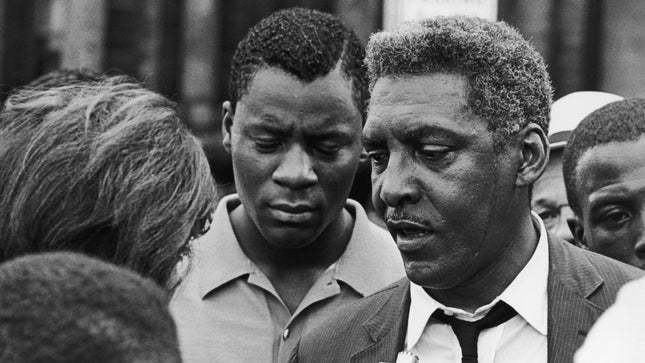 We encourage our partner organizations to recommend qualified, interested candidates to be mentors for our inaugural class of mentees. To help spread the word, we ask that you share our twitter threads on #BayardRustin and mentorship!

FLORIDA—US COURT OF APPEALS DECLARES POLL TAX UNCONSTITUTIONALA federal court of appeals in Atlanta, Georgia ruled on Wednesday, February 19 that the DeSantis’ administration’s attempt to force formerly incarcerated Floridians to pay their court fines and fees before regaining their right to vote is unconstitutional. The ruling is an important first win for the movement to ensure all Floridians can exercise their constitutional right to vote. It's important to note that the decision applies only to the 17 voters who sued the state.

“FRRC is cautiously optimistic about the recent ruling by the 11thCircuit. This decision is a ruling that addresses an injunction issued in 2019, and the injunction applies only to the 17plaintiffs in that lawsuit. We recognize that there are still many stops in this litigation process, and this legal battle is far from being over.

Until then we will continue to operate as we have been by engaging as many of the 1.4 million Returning Citizens in Florida as possible. […]”

NORTH CAROLINA—SECOND COURT STRIKES DOWN VOTER-ID LAWOn Tuesday, February 18, a North Carolina court of appeals struck down the state’s 2018 voter-ID law, issuing a preliminary injunction that could prevent it going into effect for the 2020 election.

The three-judge panel wrote in their opinion that “such a choice [to implement voter ID requirements] speaks more of an intention to target African American voters rather than a desire to comply with the newly created Amendment in a fair and balanced manner.”

Earlier this month, a federal court blocked the state from implementing the new requirement for the 2020 primaries; if the current lawsuit in the appellate court continues into November, North Carolina voters will not be required to show identification for the general election.

NEVADA—WORKERS SHOULD BET ON A CANDIDATE WHO GETS MONEY OUT OF POLITICS (OP-ED)
This week, the presidential candidates and their campaigns were in Nevada, with a debate occurring on Wednesday and the Democratic presidential primary on Saturday, February 22. It’s only fitting then that Albert Gonzalez, resident of Las Vegas and member of CWA Local 9413 wrote a piece that describes the connection between anti-worker policies and the wealthy special interests that pay to win in our country’s politics:

“Despite winning bargaining rights in democratic elections, union workers continue to be disrespected by the casino magnates who think they can purchase a pass to disregard the law. And this isn’t just a problem in Nevada — it represents what is happening all across America. Our democracy is only working for the wealthiest and most powerful. Like players at a casino, they bet fortunes on candidates who will cut them tax breaks while ignoring the working class, and block legislation that might hurt their profits.”

We agree with Gonzalez that the solution is clear:

“There is a solution that has been passed in the House of Representatives and stalled in the Senate. HR 1, the For the People Act, would clean up campaign finance and force shadowy election donations from billionaires into the light. This bill protects voting rights so that we can speak up at the ballot box — no more obstacles to voting for working-class Americans. And it would crack down on the influence of big money from anti-labor business giants.”

CWA is a founding partner of the Democracy Initiative. You can read the full piece here.