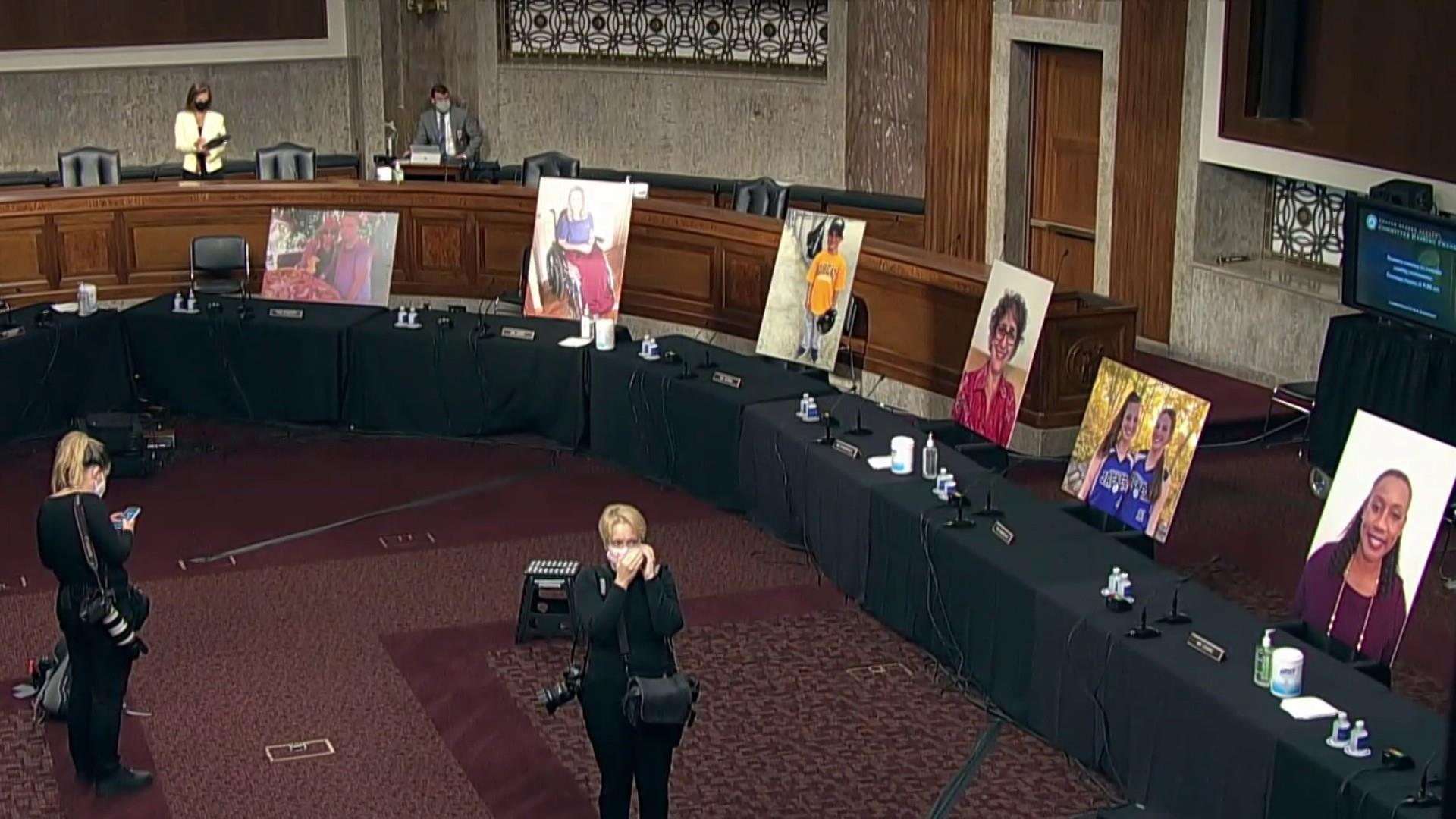 Last Thursday, October 22, the Senate Judiciary Committee chaired by Senator Lindsey Graham (R-SC) rammed through a vote on Supreme Court nominee Amy Coney Barrett just weeks away before an extraordinarily Election—marked by new voting laws, an ongoing pandemic, and unprecedented voter suppression and disinformation—may end up before the Supreme Court. Barrett was confirmed Monday evening, the first time in a century and a half that a justice was confirmed without the votes of any members of the minority party. His only priority achieved, McConnell adjourned the Senate until November 9, leaving the American people without coronavirus relief.

“It’s unbelievable that Mitch McConnell can ignore desperately needed coronavirus relief that has been pending for months, then spend just a few weeks ramming through a questionable appointment for naked partisan advantage.

“Amy Coney Barrett, if confirmed, will face an irrevocable conflict of interest. How can she rule impartially on election disputes involving the president who rushed her nomination through—unfairly and without precedent—at the very end of his term in office?

“McConnell and Lindsey Graham have broken the rules of the U.S. Senate and making up new ones as they go along. A sham process to seat a new Supreme Court justice—in the middle of an election, while people are already voting—undermines the legitimacy of the Court and will do lasting damage to our democracy.

“If confirmed, Amy Coney Barrett will be the first Supreme Court justice ever seated so close to Election Day. She will also be the only justice ever nominated and confirmed by a president who lost the popular vote and a Senate ‘majority’ that actually represents a minority of U.S. voters.

Nonpartisan Election Protection volunteers are voters’ first line of defense against restrictive election laws, coronavirus-related voting disruptions, or anything else that could silence their voices. The Election Protection coalition is currently recruiting for the following key positions; please circulate widely in your networks.

Additionally, the Election Protection coalition is recruiting volunteers in several key states and counties across the country. Alabama, Mississippi, South Carolina, and Virginia are all in need of volunteers. The specific counties in need are:

Those interested in volunteering and making a major difference for voters in their community can do so here. Volunteers will be supplied with all the information they need to get started.

We couldn’t agree more. To stay engaged in DI partners' preparation and response to post-voting state actions, we encourage you to sign up for the DI Rapid Response list here.

As the AFL-CIO statement says, it's up to us to fight for our democracy.

"The lesson of our history is clear. Democracies are not, in the last analysis, protected by judges or lawyers, reporters or publishers. The survival of democracy depends on the determination of working people to defend it."

POLL WORKER AND VOLUNTEER TRAINING
DI is supporting partner efforts to prepare their members for Election Day. Several partners and allies are providing trainings for poll workers, volunteers, and voters. Please check out these trainings and share with your networks.

The League of Women Voters of the United States is providing a Bearing Witness on Thursday, October 29 at 6:00pm EST training to prepare voters and volunteers to handle voter intimidation at in-person polling sites. Sign up for this training here. The League is partnering with DI, Flint Rising, Greenpeace USA, NAACP, and others to arm participants with the de-escalation skills they will need to be prepared for this cycle.

POST-ELECTION PREPARATION AND RAPID RESPONSE
More than 60 million Americans have already cast their ballots with more than a week to go before Election Day. With new voting laws in more than 40 states making it easier and safer than ever to vote, the country is on track for the transformative 75% voter turnout goal DI partners called for in November 2019.

Despite these promising signs, the 2020 general election will still be among the most challenging in modern history. From conducting an election during a public health crisis, to understanding the Electoral College and the process by which Congress counts electoral votes— the American public needs to be prepared for any problems that could arise along the way.

National Task Force on Election Crises has created a guide to three prospective crises of particular concern, along with recommendations and resources for ensuring a free and fair election. Read the guide here.

To stay engaged in DI partners' preparation and response to post-voting state actions, we encourage you to sign up for the DI Rapid Response list here.

Additionally, the DI is partnering with the Fight Back Table in preparation and response to post-voting state actions in the event of crisis. They have created (c)3 and (c)4 compliant listservs to keep partners in the loop with meetings, alerts, and other urgent information. If you would like to be added to either or both listservs, email Jack Flynn at jflynn@democracyintiative.org.

Protect the Results, a joint (c)4 project by Indivisible and Stand Up America, has created a map of potential events around scheduled for November 4 to mobilize voters to protect and defend the results of the 2020 Election. For DI partners and allies engaging in (c)4 work, check out the map here.

ELECTION DISINFORMATION—TOOLKIT
Through the #Protect2020 campaign, the Cybersecurity & Infrastructure Security Agency (CISA) has worked with national partners to identify, respond to, and mitigate the spread of disinformation (false or misleading information) that may impact the nation’s elections.

Reducing the circulation of disinformation requires engagement of all citizens who are part of the elections process, including you. CISA has produced a messaging toolkit and FAQ designed for election officials and civic organizations working to mitigating the impact of disinformation on the public’s confidence in the 2020 election. Get the toolkit here.

Election officials can help citizens avoid contributing to the spread of disinformation by presenting themselves as the preferred source for election information and instilling a spirit of control, empowerment, and personal responsibility within the electorate. Additionally, election officials can use strategic messaging to inform public communications and increase public access, participation, and trust in our election process.

Get the toolkit here.

ROADBLOCKS & REMEDIES: STATE OF VOTING IN 2020

On Thursday, October 8, DI released “Roadblocks and Remedies: the State of Voting in 2020,” a report that details the democracy movement’s victories over the past decades. As DI Executive Director Wendy Fields said upon release,

“The result is expanded access to the ballot box, so we are more prepared for voting during a pandemic. We’re fighting back against racism and voter suppression, for safe in-person voting on Election Day, and to create a voting system that works for how we live and work in the 21st century.”

The democracy movement has successfully expanded access to the ballot, with more voting options now available than ever before. In 2018 and 2019 alone, voters and/or state legislatures approved voting reforms in 21 states.

Our success has helped prepare the United States for a pandemic election: In response to health risks linked to in-person voting, many states have adopted proven reforms long-advocated by the democracy movement, including Early Voting and Vote-by-Mail (or no-excuse absentee voting).

However, as the report details, roadblocks remain to successful voting. Much of the coverage DI’s report received in the media focused on Mississippi being the only state with in-person voting on Election Day as the only option available to all voters, though the report was covered in Georgia, Michigan, and elsewhere.

Get the full report here.

PRESSURE MOUNTS TO ELIMINATE THE FILIBUSTER

On October 19, progressive leaders in California, including DI partners, sent a letter to California Governor Gavin Newsom requesting that, should Senator Kamala Harris become Vice President, she be replaced by an appointed Senator committed to eliminating the Senate filibuster. The labor leaders, who were joined by senior leaders of the California Democratic Party, wrote “The filibuster must either be eliminated or reformed to such a degree that it can no longer block the progress our nation so desperately needs.”

The letter’s framing of the filibuster fight as key to governing effectively in 2021 reflects a growing recognition that our country cannot make progress on the issues we all care about with a Senate rigged for the benefit of the wealthy and powerful. Other voices in the media are beginning to pick up on the message coming from the grassroots: